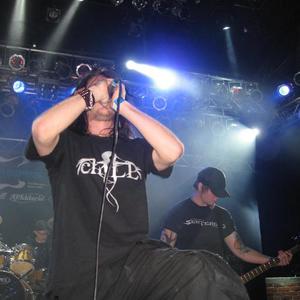 chILL's music can be described as some kind of "controlled chaos", where grunge driven rock blends seamlessly into brutal metal. The band's goal is to make internationally competitive music without any kind of restrictions or preconceptions, and to create something genuine and special in these times of superficial recycled entertainment. All the solutions in their music are not necessarily always by the book and they shouldn't have to be. Grungy vocals and monster metal riffs mixed with plenty of catchy hooks and beautiful melodies will keep you coming back for more.

Lyrics tell real stories of life, death, love, betrayal, hate, violence, addiction and alienation in a world that seems more and more chaotic every day. Man's compulsive need to destroy himself and everything surrounding him never seizes to amuse.

"In Your Spine" is chILL's new 2-song promo mixed by Miitri Aaltonen. The release is promoting chILL's forthcoming album and giving everyone a little sneak peek of what's to come. "In Your Spine" is released through a fairly new finnish record label TWISTED ENTERTAINMENT. The label's first release was chILL's widely disputed debut album "controlled chaos" in 2008. chILL continues to divide people's opinions with "In Your Spine" by mixing catchy rock melodies with dark, experimental metal. Both songs deal with the loss of someone close and the release is dedicated to a very dear, tragically deceased friend of the band's... one of the reasons why the release was decided to be distributed freely. From the first of February the songs and original artwork of "In Your Spine" are available for FREE download at www.chILLinypurspine.com In February 2010 the band starts doing shows again with a band (among others) called SAASTA. SAASTA plays finnish grunge influenced rock acoustically with guitar and keyboards. SAASTA is recording it's first EP "Harmaaseen Hukkumassa", which will also be released through TWISTED ENTERTAINMENT.