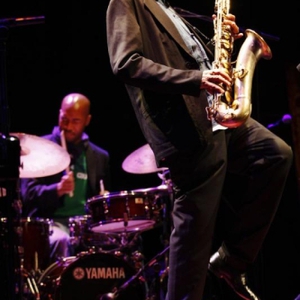 Lloyd was born in Memphis, Tennessee. From an early age, he was immersed in that city's rich musical life and was exposed to jazz. He began playing the saxophone at the age of 9 and took lessons from pianist Phineas Newborn. One of his closest friends was trumpeter Booker Little. Lloyd became a sideman in the blues bands of B. B. King, Howlin' Wolf, Bobby "Blue" Bland and others.

In 1956 Lloyd moved to Los Angeles and earned a music degree from the University of Southern California. During this period Lloyd played in the big band of Gerald Wilson. From 1960 to 1963 Lloyd played in the band of drummer Chico Hamilton and became its musical director. Though the band was known for playing "chamber jazz" at the beginning of Lloyd's tenure, his influence as a composer and a player quickly pushed it in a more progressive post-bop direction. Lloyd's key musical partner in the band was the guitarist G?bor Szab?. In 1964 Lloyd left Hamilton's group to play with alto saxophonist Cannonball Adderley. During this period he recorded two albums as a leader for Columbia Records; his sidemen were other young musicians including Herbie Hancock, Ron Carter and Tony Williams. Through 1966-1968 Lloyd led a quartet with pianist Keith Jarrett, bassist Cecil McBee (afterwards, Ron McClure), and drummer Jack DeJohnette, that producer George Avakian signed to a contract with Atlantic Records. The quartet's music was an interesting fusion of straight-ahead post-bop, free jazz, and soul jazz. The group's music quickly caught on with both jazz fans and critics. Somewhat surprisingly, they also achieved a fair amount of crossover success with young rock fans and became the first jazz group to play in The Fillmore. The album Forest Flower became a big commercial hit, largely on the strength of the title track. Other noteworthy albums include Dream Weaver and Love-In.

In 1968, after the quartet's demise, Lloyd entered a state of semi-retirement. Despite recording several albums during the 1970s and occasionally appearing as a sideman, he practically disappeared from the jazz scene. During the 1970s Lloyd played extensively with The Beach Boys both on their studio recordings and as a member of their touring band. In the late 1970s Lloyd was a member of Celebration, a band composed of members of the Beach Boys' touring band as well as fellow Transcendental Meditation followers Mike Love and Al Jardine. Celebration released two albums.

Upon being approached by pianist Michel Petrucciani in the early 1980s, he resumed playing actively. From 1989, Lloyd toured actively and recorded for the ECM label. Although his playing had not changed much stylistically since his groundbreaking work in the 1960s, these recordings showcased his sensitivity as a ballad player. Noteworthy albums include Canto, Voice in the Night, The Water Is Wide (featuring Brad Mehldau, John Abercrombie, Larry Grenadier and Billy Higgins) and Lift Every Voice (featuring Geri Allen).