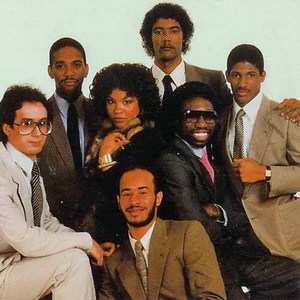 There are at least four bands/artists with the name Change: 1: This great band is one of the best, but also one of the most underrated in the soul, disco and R&B genres during the first half of the 80s. They created a catchy, smooth and polished disco, and later R&B and pop funk sound, with a touch of heaven. Here is the story about the group that might let them shine a little bit longer and perhaps do so for new music lovers as well, they certainly deserve it!

1: This great band is one of the best, but also one of the most underrated in the soul, disco and R&B genres during the first half of the 80s. They created a catchy, smooth and polished disco, and later R&B and pop funk sound, with a touch of heaven. Here is the story about the group that might let them shine a little bit longer and perhaps do so for new music lovers as well, they certainly deserve it!

It all started in 1979 with a nameless musical project. The name was finally agreed as "Change", a perfect name considering the coming changes of the number of projects in GMP Petrus decided to keep. The main forces behind Change was the Italian Davide Romani, that had joined GMP in 1977 as a self-taught bass guitar player, and fellow countryman Paolo Gianolio on guitar, with a solid classic guitar education behind him. Romani himself also wants to give a great deal of credit to another Italian musician, Rudy Trevisi, that played a more important role for Change than most people know. Romani didn't write anything in the first few years with GMP but got the greatest chance of his life on this new project after Petrus had persuaded him to compose some tracks despite the fact that Romani hadn't composed anything before. It turned out to be a very lucky strike for both Petrus and Romani. Together with Malavsi, Gianolio and Garfield they wrote all the tracks on the debut.
The only things left to do for Petrus was to find the singers and writers of the lyrics as the Italians hardly spoke any English. For that Petrus looked overseas, towards the USA. Soon he found guys like Wayne Garfield, that also (co-)wrote some tracks, and Tanyanette Willoughby for the lyrics and the two main vocalists in Luther Vandross and Jocelyn Brown. Vandross, that caught Petrus' attention after he had heard him singing in a Coco Cola spot had a highly sensitive, emotional and expressive voice Petrus was looking for. Vandross had earlier been a well-appreciated background singer for artists like Roberta Flack, David Bowie and Chic, worked with highly successful and famous commercial advertisement for radio and television and been singing in the adult choir in the film "The Wiz" in 1978. He had even released two rarely heard albums on Cotillion under the name "Luther" in 1976 and 1977 but both of them, despite hitting the charts with one single from the debut, didn't reach any greater interest and soon vanished in the flood of music.
This gig on the first album of Change became his Luther Vandrossbig breakthrough and opened up the road of incredible fame and commercial success as a (second try) solo artist with the strong debut "Never to much" in 81 on Epic. With that release and many others to come Vandross became one of the biggest soul stars during the 80s and 90s. Vandross realized his value when negotiating with Petrus and expressed two demands to him before joining in. He wanted the have full control of the recording process of his voice and be able to stop whenever he wanted if he wasn't satisfied with the recordings and secondly to be credited as the main vocalist, something Petrus originally didn't plan to do. Both demands were accepted. This was a bigger catch than anyone could imagine.
Jocelyn Brown on here side had made even deeper footprints in the sand of music than Vandross. She had earlier been a member of the obscure disco group "Musique" and became one of the original members of the later well-known "Inner life" band in 1979 and scored with them incredible hits like the remake of the classic hit "Ain't no mountain high enough" in 1981 and the catchy "I like it like that" in 1982. Brown certainly did posses valuable experiences from similar kind of music that Petrus/Malavasi produced and was like Vandross a perfect pick. She was later married Shaw and was for a short time credited as a background singer with that name on albums by Change in 80 and 81. But in 82 she was divorced and used her old name once again and become under that name a successful solo star during the 80s. Her solo career included the tasteful debut in 1984 including the funky dance hit "Somebody else's guy".
Important to remember though is that Change were, despite great singers and a huge "band potential", a studio concept. The fact corresponded well with the stylish cubist album cover made by Frank Porto without any pictures or credits of Change being a band on the cover....

2: Change is also the name of a rapper from San Diego, CA. Change is the co-founder of Giant Squid Records.

3: Change is also the name of a Christian rapper from Detroit, MI.

The Very Best Of Change