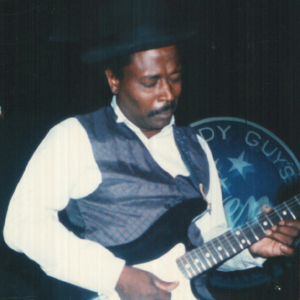 CHAINSAW DUPONT has defied and embraced the fates from day one. He was born on Friday, August 13th, 1956, in McComb, Mississippi, a town so small that shotgun houses were the norm, and grew up in Swan Lake in the Mississippi Delta, where almost everyone worked on the nearby plantation. His mother, a piano player who had received lessons from a young Fats Domino in New Orleans, was so superstitious that she celebrated David's birthday on August 12th until his 13th birthday, when she finally 'fessed up.

By that time, she had encouraged him to play music; his father, a promising boxer, had left the family permanently for New Orleans. David had picked cotton, a job which persisted until the late 60s, when mechanization finally overtook manual labor, and he had been in bands with his 3 brothers.

"That first band didn't last very long. One Christmas - I was about 3 years old - my mother got us all musical instruments. My grandmother was watching us one day, and she left out somewhere, told us to stay in the house. We decided we had a marching band, and started walking along 24 Highway, which was a pretty busy road there, near McComb, to the general store in town. When my grandmother found out we was playing along that highway, which was dangerous, she whipped the older boys with a switch. I got off because she figured I was too young to know any better".

He ran away from home at 14, headed south to New Orleans in search of his father, eventually staying with relatives there. By the time he returned to Swan Lake, his mother had been killed in a mysterious auto accident, and he went north with an older brother to Chicago's west side, attended high school, and began to play guitar.

"I got to Chicago in October '71 and I didn't even have a coat. I started playing guitar seriously in February '72. We were partyin' at a friend's house, I heard a Sly & the Family Stone record, & decided I had to play a guitar so I could play this riff on that record. We went to this girl Darlene's house - it was like 4 in the morning - we told her I needed to borrow her guitar. Even today, when I hear that lick, it moves me. I started to play all day from 10 in the morning till 10 at night."

Music has ruled his life since then, and he traveled the country, playing in a wide variety of bands, including jazz, reggae, and even backing up a black Elvis impersonator. Chainsaw was homeless for a time, met a young Stevie Ray Vaughan, narrowly missed being killed by white supremacists, and generally lived an itinerant life during that time, until settling back in Chicago in the late 80s. After several band projects, and a demo recording, he caught the attention of blues harp legend Junior Wells, and hooked up for an international tour that included Japan, in the coveted spot as Junior's guitarist.

He continued writing songs with his collaborator and producer Steve "MrBiG" Pasek, in a style he calls "Delta crush", a sort of industrial blues that would eventually see daylight on "Lake Street Lullaby", a collection of original songs released independently in the Fall of 2003. His experiences growing up on the plantation, on the road as a homeless musician, and playing the Chicago blues circuit have all contributed to the album, which is part of a larger "blues opera" that attempts to narrate the blues experience. Working with bands in both the trio format popularized on Chicago's west side, as well as the larger configurations favored by Muddy Waters and other southside players, he is collaborating and developing new takes on urban blues that reflect more modern influences yet pay tribute to the classics, still tempting the fates by taking chances, but choosing his notes and words carefully in his songcraft.

His debut CD, "Lake St. Lullaby", includes a song cycle of 13 original songs that document the journey he and so many other bluesmen have made from the Mississippi Delta to Chicago, and marked him as one of the brightest songwriting talents on the Chicago scene today. The release of ?Bourbon St. Breakdown?, his second full CD, and the second part of a blues trilogy, contained another 13 originals, in a variety of Louisiana styles, and he completed "Ghost Kings of Beale St.", a Memphis-themed record, in 2007 to complete the trilogy. He's currently working on songs for a new studio release, and touring on two new live CDs, "The Real Guitar Hero", and "Acoustified/Electrified".