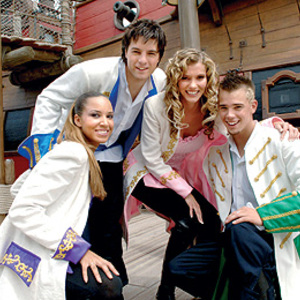 The members of Chipz (or "CH!PZ") met each other in 2003, at an audition for a new pop group. Even before they made it to the finals they all got along really well, and by the end of it, they were best friends and formed the bubblegum dance group Chipz. Chipz is probably one of the most recent bubblegum dance groups, and is still releasing albums and songs today. Their videos are all of the same style: The members of the band are in exotic surroundings, and they all wear similar styles of clothing (for example, in Ch!pz in Black, they all wear black outfits).

Their videos are all of the same style: The members of the band are in exotic surroundings, and they all wear similar styles of clothing (for example, in Ch!pz in Black, they all wear black outfits). As such, they overcome a horse thief in "Cowboy", aliens who kidnapped their fellow campers in "Ch!pz in Black", a magic lamp thief in 1001 Arabian Nights, and in One, Two, Three! they fight against their evil selfs. All of this happens amidst clips of highly stylized dance moves, which inevitably defeat their enemies.

Rach-L
Rach-L (real name, Rachel van Hoogen, born 27th November 1983) has been singing and dancing fanatically since she was 11. "Using a hairbrush as a microphone, I gave shows on birthdays, with music from Michael Jackson or Whitney Houston. I acted like I was standing on a big stage, and my family was the public!". It was a logic step that Rach-L's parents signed her up for a dancingschool. There she could focus her attention on her big passion. Rach-L developed her dancing skills very quick. She was soon asked to give streetdance lessons to other groups at the dancing school. Beside singing and dancing, Rach-L's biggest hobbies are fashion and shopping. A well groomed appearance is a must for Rach-L; therefore, it's not a surprise she finished her study visagy with great marks.


Peter
Peter (born 19th April 1984) is a real streetboy. He was more often with his friends on the square than in the livingroom. And if he was at home, he was only busy with playing the newest video- and computer-games, although Peter's mother. Outside, he was always skating and by way of his friends, he came in touch with some streetdancers. "I found them really cool and I wanted to become just as good as they were, or even better. I trained with them every day and I also went to all sorts of workshops from famous dancers and choreographs". Because of his dancing-skills, Peter was attracting the attention of professionals from showbizz. In the past few years, he has regularly been performing as a background dancer for several national and international artists. When Peter had seen a little bit of the artist life, he knew it for sure: he also wanted a place in the spotlight. Next to his dancinglessons, he began to follow singing-lessons to develop into an allround artist.

C!lla
Cilla (born 11th Dezember 1985) is the youngest member of the group. She always knew that she wanted to make a career in the showbizz. She participated in several talent hunts and she stood as a 5 year old girl in Henny Huisman's Mini-Playbackshow. "Now and then, I watch the video and then I hear my parents and my brother say: see Cilla, you always had it in you !" Still, she finds it very important to finish her school. "That's not easy" says Cilla. Therefore, she spends every free hour in her busy schedule with Chipz to study for test papers and preliminary examinations. "It is hard, but if you really want to, you can combine it". Matter-of-fact Cilla can't be stopped anymore: she sings and dances the whole day and is determined to gain big successes with Chipz.


Kev!n
Kevin (born 14th Februar 1985) has, beside his love for singing and dancing, a weakness for cellphones, computers and all other electronic gadgets. He can be busy with them whole day long and he likes to solve technical problems which others can't solve. In sports, he is also shining. Because of this, he had to make a hard decision when he was 16: he had to choose beten becoming a professional soccerplayer, or go on seriously with singing and dancing. When he became European Streetdance Champion in 1999, Kevin knew it for sure: "I only wanted one thing : conquer the world of showbizz !" Now he can put his unbridled energy and passion for singing and dancing in Chipz. Kevin still plays soccer, but now he does that on his CIOS-opleiding. "Maybe once I will be cheered in a soccerstadium. Seeing 80 000 people go crazy for Chipz, that sounds really cool to me", Kevin says.

In the Netherlands, many radio stations did not play the Ch!pz' songs because most of the listeners found their songs too childish. However, thanks to promotions on Fox Kids, Ch!pz became one of the most well-known bands in the Netherlands. Within a year and a half, the band had had three singles at the top of the Dutch singles charts. All of their singles went straight to the number 1 position, except Captain Hook and their debut single Ch!pz in Black. Their debut album The Adventures of Ch!pz was released in 2004 in the Netherlands, which went straight to number 1 in the Dutch album chart. In 2005, The World of Ch!pz was released, their second album. Singles from it include 1001 Arabian Nights , One, Two, Three! and Carnival, of which all peaked at the #1 position.
At the beginning of 2005, "Ch!pz in Black", the first single from Ch!pz released in Germany, and climbed to #2 on the German charts. Shortly thereafter, at the beginning of May 2005, their second single, "Cowboy", made it to the second place as well. A week later, it made it all the way to #1 position.
Their videos are all of the same style: The members of the band are in exotic surroundings, and they all wear similar styles of clothing (for example, in Ch!pz in Black, they all wear black outfits). As such, they overcome a horse thief in "Cowboy", aliens who kidnapped their fellow campers in "Ch!pz in Black", a magic lamp thief in 1001 Arabian Nights, and in One, Two, Three! they fight against their evil selves. All of this happens amidst clips of highly stylized dance moves, which inevitably defeat their enemies.
In April 2006, they released a new single in the Netherlands, Gangstertown. Two months after the release of the single, that peaked at #5 in the Dutch Top 40, an EP was also released, Past:Present:Future (Part 1). A music video was shot for "Waikiki Beach" too, but was never released on single. In late September, their latest single "One Day When I Grow Up" was released. The single entered the Dutch charts at #29 and climbed up to peak at #7. A second EP, Past:Present:Future (Part 2), was released in November 2006.
"Cowboy" was released in the United Kingdom on February 12, 2007, while "Ch!pz in Black" is now slated for a March 26 release.
In December 2007, they released a new song, "Make a big splash", entering at number 3.
After that, they made a TV programme named Chipz Dance Xperienz, in which they showed their choreographies. After that, to support the programme, in September 2008 they released "CDX" (Chipz Dance Xperienz), their new CD, preceded by the single "Dance Xperienz"

The adventures of Ch!pz