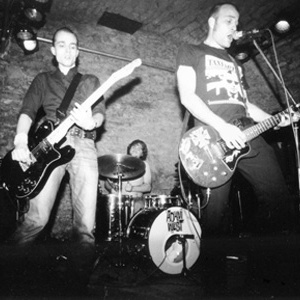 The year is 1999 and while the world is obsessing about the upcoming new millenium, three boys decide to give a big middle finger to all the confusion. They unite their unique individual lack of musical abilities and start cranking out the most primal of tunes. Almost immediatly people in their hometown Eindhoven picked up on their fresh and fun style and sound, and the boys were asked to bring some fun into many a barbeque party. In December '99 the band released their debut 7" I've Got A Feeling on their own label Roulette's Records.

So things started rolling... rolling fast. When laugh-of-the-town Carlos S. was recruited as bass player, 69 Charger, now more powerful then ever, started their crusade. Spreading the word from town to town, country to country, putting the smile back into the lives of youngsters, oldies, babies and their mothers all over the world. And they haven't stopped just yet!

More releases on Roulette's followed and the boys played like 80 shows a year in Holland, Belgium and Germany alone. So the word got around... Early 2004 the band got picked up by the infamous Stardumb Records. The first, ass-shakin' full-length 69 Charger album Trash Deluxe! saw the light of day, and was an instant hit, getting raving reviews in magazines across the globe. The album was even at the top spot of Fret Magazine's Lowlands Top 25 for two months!

Have a look at: http://www.myspace.com/69charger

Ain't Got A Clue