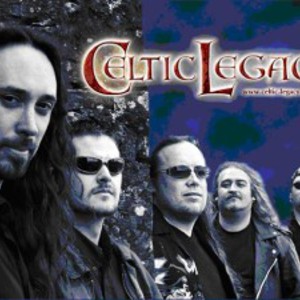 Celtic Legacy is a Heavy Metal band from Ireland formed in late 1997, often styled as a cross between Thin Lizzy/Iron Maiden. The line-up of this band has changed on numerous occasions but the original founder members continue to write and record material. The band have released two self-financed albums to date and a third is being worked on for a tentative release set for late summer 2006. History:

The line-up of this band has changed on numerous occasions but the original founder members continue to write and record material. The band have released two self-financed albums to date and a third is being worked on for a tentative release set for late summer 2006.

History:
The band evolved from a recording project called 'Mischief' which had been started by guitarist Dave Morrissey and Bassist/Vocalist Dave Boylan. Throughout most of 1997 the two musicians wrote and recorded numerous tracks which were recorded using the minimum of resources available. By late Autumn they decided to expand the project into a full group.

Over the course of the next five years the band recorded two albums with both being completely self-financed and produced. The debut album Celtic Legacy was a highly experimental affair with several styles of music in evidence although the emphasis was clearly biased towards a hard rock sound. Highlights of the album included Lost Soul, Glen Corr - The Spirit Of The Vagabond and the epic title track itself which clocked in at over 12 minutes. Another high point of this album was its closing track Waterfront which featured fiddle player Ciara Roe to full effect.

After the album's release, the line-up began to fall apart. Within six months singer Tom Branagan had left and a re-think was required. In 1999 Dave Boylan took over vocals for a 6-song demo which featured new tracks some of which would eventually surface on the next album.

The following year Legacy returned with a revamped line-up which even featured a female vocalist Mel Shields. They recorded another demo which had a heavier feel than earlier material and pointed the way to the style the follow up album would take. This line up also foundered however when objections from a prospective record label to a female vocalist make the band's position very fragile. Undaunted, Celtic Legacy involved themselves with an album entitled The Spirit Of The Black Rose - A Tribute To Philip Parris Lynott and contributed 2 songs to the double CD set: Glen Corr - The Spirit Of The Vagabond and a cover of Thin Lizzy's Vagabonds Of The Western World. Guitarists Dave Morrissey, a graphic artist by trade was asked to design the album cover by Philomena Lynott, which he did for free. The album was released in April 2001 on the Record Heaven Label.
Following the release of this album Legacy went into hibernation until February 2003 when fan power from Germany brought it back to life. One fan in particular, Vladimir Hrubik undertook a campaign to raise the recording funds for a new album, doing so incredibly within only four months. A new line-up was put together and they recorded and released Resurrection which was released in November of that year.

A huge improvement over the debut album, Resurrection received incredible reviews upon its release and was widely regarded as one of the best Irish albums ever. However due to it being released independently and without any record label muscle, the success of the album would never go past the underground cult status it achieved. In the wake of the album's release another fragmentation of the line-up followed and by July 2004 only the founder members remained once again.

Plans to record a third album in 2005 were shelved when ongoing problems with replacements as well as increased pressure on the band's domestic lives led to the founder members deciding to take 12 months off to consider their options and concentrate on their personal time.

At the time of writing, a new line-up has come together and writing has continued for the next album which will be called Guardian Of Eternity which should surface sometime in 2007.

The Lie Of The Land