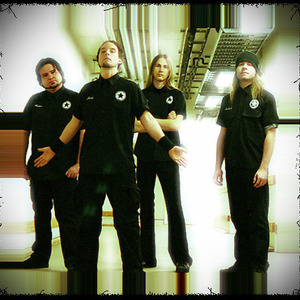 Sweden knows riffs. From obtuse garage punk to anthemic pop to despondent death metal, the Scandinavian stronghold boasts countless crossover acts that consistently blow minds stateside. Their latest export fits into exactly none of the aforementioned categories, yet are so expert at their craft that they conjure all of them and more. Stockholm hard rock quartet CellOut are poised for bi-continental dominance on the eve of their Nuerra Records debut, Superstar Prototype. Flaunting infectious melodies that are this unapologetically this heavy young band's trademark, Prototype's title is as ambitious as its content, aspiring to be "the blueprint which all metal/rock records will set as standard," according to frontman Percy Mejhagen. "I believe that the intelligence of a songwriter shows in how dynamic he or she dares to be," adds Mejhagen. "No matter how 'hard' or 'fast' a song is, it still has [to have] that big fat chorus, which I hope will be CellOut's trademark in the future."

Given their penchant for diversity, it's only right that CellOut's origins trace back to a metal guy (Mejhagen, who counts Sepultura, Machine Head, Korn and Pantera among his early favorites) getting together with a melodic rock fan, guitarist Robert Monegrim. After Monegrim caught a live radio gig from Mejhagen's band, the Shopliftingangels, he was so impressed that he invited the singer to lay down some vocals in his home studio. "I was surprised that the songs were way heavier than I expected from Robert," Mejhagen remembers. "I had a desire to start playing metal again, so Robert's invite came as a blessing. We recorded a few tracks and afterwards we both knew that this was too good to just stay in a computer."

After hooking up with bassist Anders Sevebo and drummer Thomas Ohlsson (recently replaced by Martin Karlsson), the freshly christened CellOut were ready to attack, refining their approach through steadily improving demos. "Personally, I'm a sucker for melodies," Mejhagen confesses. "The sweeter the better, but with a dirty twist to them. I found out pretty fast when I started to sing that I'm not comfortable screaming the way a metal singer 'should' scream. Instead, I work with strong melodies and we let the guitars [do] all the screaming."

And scream they do, all over Superstar Prototype. Mixed by Grammy nominee Ulrich Wild (Pantera, Deftones, Static-X), the album balances relentless guitar heroics with unforgettable hooks. "If you asked us for one word that would describe CellOut, it would be 'dynamic,'" Mejhagen confirms. "I think that a song like 'The Gift' is gonna show our willingness to explore the realms of dynamics. But we also have a ballad on the album called 'Flooded,' which we strongly believe in." "From the beginning everyone invested the time necessary, making a record we could all feel extremely confident about. I am very excited about the band's future", says Michael Phelan of Nuerra Records.

World In My Eyes