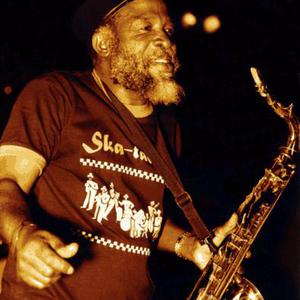 Tenor Saxophonist Cedric ?IM? Brooks is one of Jamaica's most adventurous musicians. Born in the heart of Kingston, Brooks was a student at the legendary Alpha Reform School for Boys in Vineyard Town. In the 60's Brooks attended college in the USA and eventually moved there permanently. 1) Brooks has experimented with African rhythms, fused elements of Jazz, Latin, and soul music and has created a unique multi rhythmic sound and a live show as extravagant as those presented by Sun Ra, Hugh Masekela and Afro Beat artiste Fela Kuti.

1) Brooks has experimented with African rhythms, fused elements of Jazz, Latin, and soul music and has created a unique multi rhythmic sound and a live show as extravagant as those presented by Sun Ra, Hugh Masekela and Afro Beat artiste Fela Kuti.
2) He has been a mainstay for of the famous Studio One recording studio in Kingston since the 1960's.Along with such Jamaican Jazz luminaries as Ernie Ranglin, Vin Gordon, David Madden and other s they became the backbone of one of the most distinguish house band and creators of some of the most memorable rhythm tracks emerging out of Jamaica.
3) He was head of the jazz department at the Jamaica School of Music.
4) He continues to play and tour with the world famous Skatallites Band.
5) Mr. Brooks work has been featured in ground breaking works by aggregations and band he has conceptualized and formed over the past 40 years. He created first with David Madden, a Alpha colleague and fellow horn player, to the multi layered group United Africa, the melodic Africa centered Divine Light which eventually morphed into the dynamic Light of Saba - a conceptualized show featuring singers and dancers enhancing the smooth sound of a beat embracing strains of jazz, Latin, soul, reggae, calypso, nyahbinghi drumming and featuring an celestial horns so embracing it enchant your sensory perceptions commanding you to dance, sway, sing.
6) It was through Rastafarian ground a tions that Mr. Brooks collaborated with Count Ossie and the Mystic Revelation of Rastafari to introduce to the world the exceptional and creative sounds of Rastafari chanting that influenced the work of artist from Bob Marley and the Burning Spear, to Steel Pulse and Oku Onuora. He continues to be influential as he travels as a musical philosopher, teacher, elder statesman and collaborator .
7) The Alpha Boys School was the starting point. It still figures prominently in the life of Mr. Brooks, who visits often to share his knowledge with the youngsters who now sits in the place her once sat. it remains the foremost conduit for musicians heading to the professional ranks, the military and other leading bands on the island.