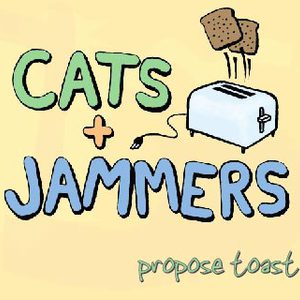 Scott Anthony - Guitar, Lead Vox Max Crowe - Bass, Backing Vox Addison Monroe - Drums, Backing Vox Chicago From Jeff, Delusions of Adequacy "Does anyone out there know about Too Much Joy? They have to be one of the most overlooked power-pop bands, even with five full-length albums and more. A large portion of that underappreciation is likely due to their desire to be funny and clever, especially in their early music. The mainstream market chuckles at funny but doesn't embrace it. Yet they have a very devoted following.

Cats & Jammers reminds me completely of Too Much Joy, especially in TMJ's early years. Like Too Much Joy, Cats & Jammers embrace humor. With songs like "Mannequin," "White People Can't Dance," "The Cuddle Song," and so on, you can tell you're going to get a dose of attitude-heavy humor and fun. Like TMJ's early work, this is power-pop pure and simple. It's not especially original, primarily three-chord power-pop blasts. And with 11 songs but under 24 minutes of music, you know it's just short bursts of incredible catchy pop songs. And, like Too Much Joy, it's bound to be your guilty pleasure. Too Much Joy had a theme song, and so do Cats & Jammers. There's goes, "We're Cats & Jammers, and we're here to say, have a super happy day!" Isn't that a pleasant way to start an album? "Zodiac Girl" is one of the catchiest songs on the album, but then I guess they're all catchy. "Zodiac Girl, tell me my horoscope and I'll do anything!" There's lots of audible exclamation points on this album, by the way. "Lollipop Lies" is probably one of the most original songs on the album, with some crisp guitar and some catchy bass lines, punctuated by little blasts of guitar. "The Cuddle Song" is more like early punk-pop, with a little bit more angst and attitude thrown into the vocal blend. There's a Kink-esque poppy feel to this song too, which is fitting because the band does a version of Ray Davies' "I Need You." And you can't help but feel that punch of that punk-pop energy in "Smile Now," complete with its "Uh! Uh-huh!" Mannequin song ("I'm in love with a mannequin! She don't talk too much, she don't tell me how I should feel!") is one of the catchiest and most fun songs on the album, bound to get you wishing for your own mannequin to love. "White People Can't Dance" has more of that Kinks feel about it (and singer Scott Anthony even sounds like TMJ's Tim Quirk), and "Run and Hide" finishes things off with a bass-heavy dose of pure power-pop. Ok, first don't expect musical geniuses here. These guys are quirky and fun and playing three-chord power pop, plain and simple. But these songs are clever and damn catchy, and I guarantee you'll be singing them at 3 in the morning. I expect that, like Too Much Joy, this band will develop its own loyal following who just can't resist the Cats & Jammers charm. For added pleasure, check out the extra CD stuff, like videos, other songs, a little game, and more. For extra added pleasure, check out the Cats & Jammers singles club, where you get a new C&J song every month!"