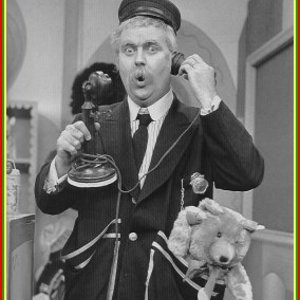 Captain Kangaroo was a children's television series which aired weekday mornings on the American television network CBS from 1955 until 1984, then moved to Public television when the American Program Service (now American Public Television, Boston) distributed the program with some newly produced segments which were integrated into reruns of past episodes from 1986 - 1993. The show was conceived and the title character played by Bob Keeshan, who based the show on "the warm relationship between grandparents and children.

Keeshan was the original Clarabell the Clown on the Howdy Doody Show when it aired on NBC.

It had a very loose structure, built around life in the "Treasure House" (later renamed "The Captain's Place"), where the Captain (whose name came from the big pockets in his coat) would tell stories, meet guests and indulge in silly stunts with regular characters, both humans and puppets. The show was live for its first four years, and was in black-and-white until 1966. In 1983, CBS shortened the hour-long show to a half-hour and moved it to an earlier time-slot. It was cancelled by CBS at the end of 1984.

In the TV season of 1997-1998, an All New Captain Kangaroo was attempted, starring John McDonough. Keeshan was invited to appear as "The Admiral", but after seeing sample episodes declined to appear or have any association with it. The show inspired a spinoff, Mister Moose's Fun Time.

The original theme song to Captain Kangaroo (titled Puffin' Billy) was used from 1955-1974. It was an instrumental, written by Edward G. White. The track was from a British stock music production library known as the Chappell Recorded Music Library which was sold through a New York agency called Emil Ascher. The tune's original title referred to a British steam locomotive. (This tune was used on other programs on both sides of the Atlantic. For example, two years before Captain Kangaroo, it served as the wrap-up music for an episode of the radio program Rocky Fortune called "Murder Among the Statues", starring Frank Sinatra.) The "Puffing Billy" theme played as the opening of each episode, with the music continuing until the Captain hung his large ring of keys on a nail (which seemed to act as a switch to turn off the music). If the Captain's keys ever slipped off the nail, the music would begin playing again.

In 1974, a new theme song was composed for Captain Kangaroo, written by composer Robert L. Brush. As the new theme used similar melodic elements from the original theme, Edward G. White's name was added to the song credits.

Many popular songs make reference to Captain Kangaroo, including the Statler Brothers' 1965 hit song Flowers on the Wall (later covered by Eric Heatherly); the "Weird Al" Yankovic song "The Brady Bunch"; the Bloodhound Gang's Your Only Friends Are Make Believe; and the VeggieTales song, The Pirates Who Don't Do Anything.

In the first season Get Smart episode, "KAOS in Control," a reference to Captain Kangaroo is the clue by which Maxwell Smart discovers that CONTROL scientist Alma Sutton was only pretending to have been zapped with the "electro-retrogressor gun," and was in fact the KAOS agent who had stolen it.

In the Doctor Who episode "Remembrance of the Daleks", the Captain Kangaroo theme music is clearly heard during a caf? scene.

A Sunday Shoe strip shows Skyler watching TV and admiring a certain man's charm: "He looks great for his age", "He's a great communicator", etc. With all that he says, the reader is led to believe he was referring to President Ronald Reagan, especially when his uncle Cosmo Fishhawk believes him to be a Reagan fan. But in the last panel it turns out Skyler had been referring not to President Reagan, but to Captain Kangaroo!