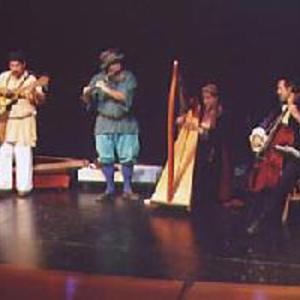 CANTIGA began at the Texas Renaissance Festival in Plantersville Texas as the result of a musical collaboration which began in the 1970's. Fiddler Malcolm Smith and harpist Martha Gay joined forces to focus on the performance of ancient Europeam repertoire. The group selected the name CANTIGA, meaning "song" in Spanish in the tradition of Alfonso X, also known as "El Sabio". Alfonso X is remembered for bringing musicians from all over the world to share in an exchange of music.

The duo added several more musicians to round out the melodies. Joining with troubador Owain Phyfe, they formed the critically acclaimed "New World Renaissance Band", performing and recording early music for modern ears.

Cantiga has released 3 critically acclaimed CD's: "Once Upon a Time", "Magic Steps" and most recently "The Otter's Pool".

MARTHA GAY studied harp with Mildred Milligan and later with Derrick Bell of the Chieftains. She brings an intense love of history to her music, a love which formerly led her to Oxford University where she studied Archaeology.

BOB BIELEFELD performs as a festival and theatre performer. He plays flute, fife and specializes in the ancient instruments of the recorder family. His musical experience includes a wide spectrum of influences ranging from classical to jazz, ethnic to barbershop quartet. Bob has a large repertoire including European, Celtic and English Dance melodies.

MARK CAUDILL A Celtic fiddler of great versatility and charm, Mark brings infectious musicality and a sunny personality to the group. From Boston, Mark attended Harvard as a geology major before returning to full-time music making, joining Cantiga in 1999.

MAX DYER adds the proper mix for bringing all the instruments together with his cello. He also plays with the the Houston Ballet and enjoys all kinds of music.

CONRADO "CHARRY" GARCIA plays charango. He is from Chile and specializes in the music of Central and South America. Charry joined Cantiga in 2001

Once Upon a Time: Music of Innocence and Enchantment