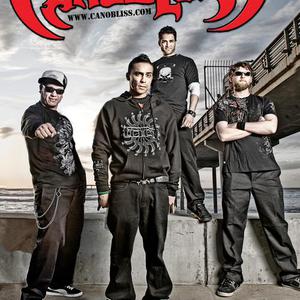 CANOBLISS is fighting for their lives. A proudly independent San Diego, CA based modern hard rock/metal band that breaks boundaries, Canobliss consists of four diverse members whose varying backgrounds and influences result in a group that has been declared "One of the most unique independent metal bands making music today." -- Derric Miller (HardRockHaven.net). The band toured through 10 states; received a nomination for a San Diego Music Award; opened for legends Disturbed, Avenged Sevenfold, Stone Sour...

The band toured through 10 states; received a nomination for a San Diego Music Award; opened for legends Disturbed, Avenged Sevenfold, Stone Sour, Hell Yeah & more; had songs featured in multiple extreme sports DVDs; filmed a new music video; released an 11-track album? all since May of 2010 alone. More impressive still is that the band has accomplished this without the help of an external record label, producer, or manager. Canobliss has pushed forward in an immensely competitive industry and gained traction through their own sheer determination, talent, and hard work. They have exhaustively spread their name and sound by touring across the US, playing hundreds of live shows, selling thousands of albums, handing out nearly ten thousand free demos, tagging up countless stickers, developing a strong online presence, and creating a full line of merchandise. Canobliss has managed to developed a broad and continuously growing fan base without compromising their musical integrity or independent spirit.

But we must not forget where we come from?

With their lineup finally solidified in the summer of 2006, the band went on a writing binge and cranked out three albums: Liberation of Dissonance - 2007, Psychothermia - 2008, and Man Is The Enemy - 2010. Canobliss is proud to have completely self-produced all three albums from start to finish including writing, tracking, & mixing in their home studio (C.V. Studios). The power of these albums has been proven... L.O.D. was nominated for a 2008 San Diego Music Award and hit number 1 at multiple college radio stations across the country. Psychothermia achieved song placements in several extreme sports DVDs as well as on the cable TV show Music Choice Metal. Man Is The Enemy was nominated for a 2010 San Diego Music Award and achieved multiple noteworthy song placements including the snowboarding film "The Saturday Night Ride" which was featured on FUEL TV! The band has gone on five successful independent tours across a total of 14 states to support these albums.

Founding guitarist Samson Pedroza parted ways with the band in June '10. Canobliss is now looking forward to taking the world by storm with new music capturing the essence of the struggle they have endured and the band they have become. New tunes are in the works with a tentative release date of fall/winter '11 and the "Survival of the Sickest" Summer SW Tour begins in July? you've been warned.