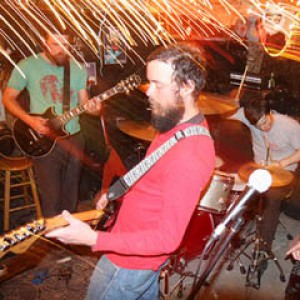 From holidaysforquince.com: Since the days of Black Sabbath, the promise of heavy rock music has been this: that a perfect series of riffs, reinforced by a tightly-wound rhythmic unit, can deliver very real psychedelic effects, forcibly altering one's conscious state of being. Though post-modern doomsters have toyed with elements of the formula (witness: Earth, Melvins, Isis, etc), the principle importance of the mono-riff has remained intact.

World Class, the debut full-length from North Carolina's Caltrop, is wildly -- even transcendently successful because the band's exhilarating performances are rooted in the awareness that their music has an uncanny, historically potent power. Indeed, Caltrop's impeccable arrangements deliberately suggest a sort of ascendant scaffolding, the very foundation necessary for the audacious work of spiritual transformation.

By any measure, Caltrop's musical agenda is a daunting one. But the band's essence has been distilled -- through the calculated ambition of experience -- into a pure, uncompromising force of nature. Today, there is no stopping them. Caltrop's members -- Sam Taylor (guitar, vox), Murat Dirlik (bass, vox), Adam Nolton (guitar), and John Crouch (drums) -- cut their teeth over the past decade in a cadre of North Carolina's hardest hitting combos (El Sucio, Hazerai, Pegasus, Red Smokes White, Country Bears), and their work in those bands has paid off with impressive chops and an almost impossible tightness. It is no surprise, then, that Caltrop's achievements have become noted internationally: Of their eponymous EP (self-released in 2006), Teardrop Explodes' glam-guy-turned-krautrock-expert-turned-shaman Julian Cope says, "These gentlemen unfold into areas only the most confident of motherfuckers dare take their shit. And while the drumming is truly something else, the hugely varied guitar playing sways from bilious, cyclical twin lead riffology to 'Eruption'-style Edward Van Halen-isms of the highest quality ? Yowzah!" We couldn't have said it better ourselves. We think World Class will be the greatest metal record of 2008; enjoy!