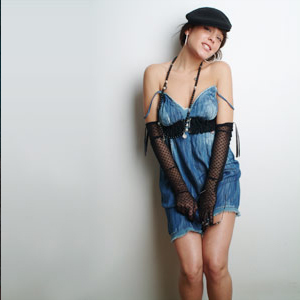 She was born and raised in Brooklyn, NYC. Her parents were russian imigrants who came to U.S.A. in search of a better life. They lived in a area of Brooklyn known as Brighton Beach a.k.a. Little Odessa. Her father started using drugs so her mom divorced him and they moved to Coney Island. Even though things were hard to cope with she found freedom in writing poetry. She came from a musical family. Her father being a drummer, mother a pianist and later her stepfather a guitar player. She was introduced to hip hop in junior high and she instantly fell in love with the music and the culture.

When she started college she realised that she'd rather write rhymes in the back of the class, than take notes. So she dropped out of college and went to pursue a career in hip hop. She performed at open mics all over nyc, did corner freestyle battles, was seen on 106 & park freestyle friday and so on.. She has developed her own unique eclectic style mixed with intelligent lyrics, funky grooves and jazzy rhythms. She has been lucky to work with legendary producers DJ Premier & Marley Marl and a few up and come ups. She was featured on the Mario remix ?Let Me Love You? with Jadakiss and T.I., as well as the Jay-Z's 99 Problems remix. She was featured on a Wu-Tang compilation called Dreddy Kruger presents ?Wu-Tang Meets The Indie Culture?.