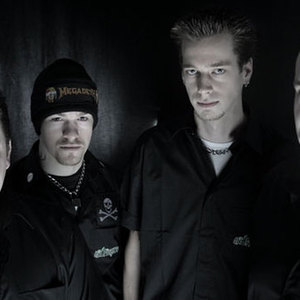 4FT Fingers play loud, tuneful and anthemic punk rock with elements of Oi, self described as "beer-skate-punk." Hailing from Cheltenham in the United Kingdom, the band have grown to be one of the most popular UK punk bands of the modern era. Bio from http://www.4ftfingers.com - visit to check out the band, music videos, download tunes and wallpaper, buy merch.... "Formed in Cheltenham in 1996, the band went through several line-up as well as name changes before they finally settled on 4ft Fingers.

"Formed in Cheltenham in 1996, the band went through several line-up as well as name changes before they finally settled on 4ft Fingers. Having mainly played locally for a couple of years, Rob, Tom, Dougie and Dave met manager Darren in late 1999 and things began to happen. The band started to gig relentlessly, playing anywhere they possibly could.

In 2001 the quartet recorded their debut album At Your Convenience and was followed by a year of non-stop touring (140 gigs in 2001), earning the band the reputation as one of the hardest working UK bands. In early 2002 4ft Fingers signed to Golf Records and recorded their second album From Hero To Zero with Dave Chang at Philia Studios & was released in September 2002. The band then commenced a 40-date UK tour under the title Golfing On The Moon (2002) followed by the 'From Hero to Zero tour in 2003. This year also them as tour support to legends such as Dead Kennedys and The Damned, a European tour with Australian band Crank and a full UK and European tour with Voodoo Glowskulls

The bands third full-length, A Cause For Concern, was recorded in early 2004 with Pete Brown at Philia Studios and was released to coincide with a UK and European headline tour in April and May. This was followed by the Fingers FIRST TOUR OF THE US IN THE SUMMER, coinciding with the American release of their new album on Go-Kart Records. During the last three months of the year, the band was back gigging in the UK, playing another headline tour in October/November, followed by a number of shows with punk rock legends The Damned. The band had four videos on Scuzz TV (Sky Digital channel 471) and P-Rock TV: Last Man Standing, Brickwall, Emergency Manoeuvre and 40 Years Of Misery. All these made it into the channels Top 5.

Towards the end of 2006 Tom decided to call it a day and finished the year of shows booked and with new guitarist JON (formally of gash)joined in his place. Bringing the band bang upto date and back with Darren as manager,4ft fingers are set to return to give the uk scene a good kick up the ass...and get back to basics where it matters...the music!! not the scenesters or hairdos!! The band have just finished recording their new album "New Beginings of old stories" 12 brand new punk rock explosive tunes......To coincide with the release,the band will be doing a massive promotional campaign to let everyone know they are back for business with a uk tour kicking off 29th feb - 27th April !! with european and festival dates to follow ! Watch this space......

Following the 'New Beginnings of Old Stories' Tour in March/April 2008 the band were booked to play some shows in the Autumn which because of personal commitments, some of the guys could not do. Dave and Jon decided to go out anyway and had a great time on the road. Shortly after that, around January time, Dave Humphries decided to leave the band to do other things. He is currently in a heavy metal band called Reign of Fury. After the birth of Dougie's 1st child in February 2009, the band decided to take a few months off the band. We started advertising for a new drummer and had loads of responses, but in early August we eventually settles on one guy who has yet to be named."

A Cause For Concern

From Hero To Zero