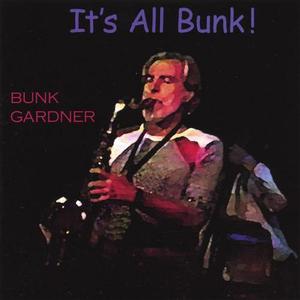 Born John Leon Guarnera on May 2, 1933 in Cleveland, Ohio. Bunk Gardner joined the Mothers Of Invention in early 1967. He recorded and toured with Frank Zappa & The Mothers Of Invention until late 1969. Shortly after he had left The Mothers, Bunk performed with Menage A Trois, with his brother Buzz and with John Balkin. Bunk Gardner also toured and recorded with Geronimo Black and with The Grandmothers.

In early 2000, a couple of albums of The Don And Bunk Show got released, the duo that Bunk had formed with Don Preston. In 2003 he took part in a concert (and recording) of The Grande Mothers Re:Invented. Besides Bunk Gardner, the Grande Mothers Re:Invented also feature Don Preston, Napoleon Murphy Brock and Roy Estrada. In 2007, the Crossfire Publications record label released Bunk's first solo album, "It's All Bunk!", collecting material from Bunk's entire career.