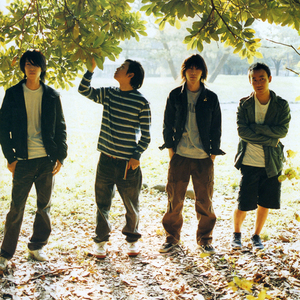 BUMP OF CHICKEN is a Japanese rock band formed in 1994 by 4 members: Motoo Fujiwara (Vocal/Guitar), Hiroaki Masukawa (Guitar), Yoshifumi Naoi (Bass) and Hideo Masu (Drums). They have been friends since preschool in the city of Sakura, Chiba Prefecture. Motoo's lyrics in particular receive acclaim. The band chose the English name to mean "cowards strike back" although they have admitted in interviews that it might not be grammatically correct English.

The band has been influenced especially by The Beatles and they actually started out playing covers of The Beatles songs at school festivals. Although their music can be quite soft, some of their most popular hits are upbeat rock songs.