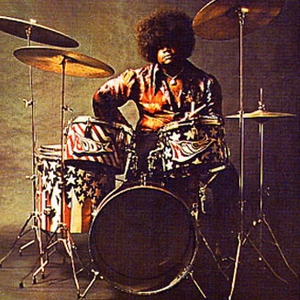 George Allen Miles, Jr. (1947 - 2008), known as Buddy Miles, was an American rock and funk drummer, most known as a member of Jimi Hendrix's Band of Gypsys from late 1969 until early 1970. Miles played in a variety of rhythm and blues and soul acts as a teenager, including Ruby & the Romantics, the Ink Spots, the Delfonics and Wilson Pickett. By 1967 he moved to Chicago where he formed the Electric Flag with guitarist Mike Bloomfield. The blues-soul-rock band made their live debut at the Monterey Pop Festival in 1967 and released their debut album, A Long Time Comin', the next year.

Miles sometimes sang lead vocals for the group in addition to playing drums. The group broke up after their second album and Miles formed the Buddy Miles Express.

Expressway To Your Skull (Vinyl)