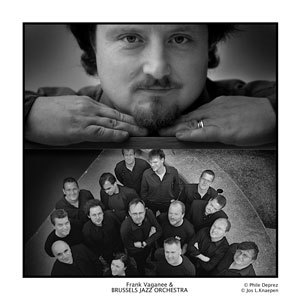 In March 1993, the Flemish jazz musicians Frank Vagan?e, Marc Godfroid and Serge Plume took the initiative to set up the ?Brussels Jazz Orchestra? (BJO), which would offer new professional opportunities to performers, composers and arrangers after the jazz orchestra of the BRT (the Belgian Radio and Television) had ceased to exist. One of the main objectives of the ?Brussels Jazz Orchestra? is, therefore, to promote the Flemish repertoire and Flemish soloists.

Now, fourteen years later, the Orchestra can be proud of having achieved its original objectives. Moreover, the BJO, conducted by artistic director Frank Vagan?e, has been able to develop into an international leading orchestra.

Proof of this was the first transatlantic concert tour in January 2001, with destination New York, where the BJO gave a concert at the conference of the International Association of Jazz-Educators, in the presence of the international jazz-scene. Pianist Kenny Werner (USA) was the BJO's guest soloist on this event. This concert was the high point in the Orchestra's history and the start of an international career. At the second concert in New York, which took place in ?The Cutting Room?, the BJO treated the concert-goers to a whole range of Flemish jazz-compositions. In 2002, the orchestra went one more time transatlantic; BJO played gigs in Boston (with Kenny Werner), Yonkers and was guest at the Litchfield Jazz Festival (with Kenny Werner).

The BJO does not only have international ambitions, however. It also works in close conjunction with the Flemish jazz-scene: the Orchestra cooperates with the Flemish composers Bert Joris, Erwin Vann, Frank Vagan?e, Michel Herr and Kris Defoort, and with Belgian soloists such as Bert Joris, Philip Catherine, Chris Joris and Toots Thielemans.

In 2004, the BJO was eight in the 52nd Annual Downbeat Critics Poll ? category big band.

In 2006, BJO received the Cultural Prize of Flanders as a recognition for the special merits that BJO delivered to the Flemish cultural live.

The BJO is structurally recognized and subsidized by the Flemish Community since 1999.