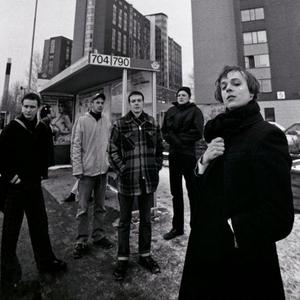 Broder Daniel was a Swedish indie band, that consisted of charismatic Henrik Berggren (vocals), Anders G?thberg (guitar - claims that Berggren bit him while barking like a dog the first time they met), Theodor Jensen (bass guitar) and Lars "Poplars" Malmros (drums). The band, often refered to as "BD", has spawned successful Swedish music acts like Theodor Jensens The Plan and the solo career of former bassplayer H&aring;kan Hellstr&ouml;m. In retrospect, this makes BD look like a Swedish all star-band.

Since they signed for EMI in 1994, Henrik has told his story about fear, broken hearts and love for all the enthusiastic fans. Early Henrik developed his trademark habit of sticking star shaped glitter under his eyes, an act that supposedly alone spawned the Swedish "panda" indie subculture (many pandas are often refered to as BD-girls/-boys) among the band's young fans, who followed the Berggren star tradition.

Between and after that, the band released some collections.

Currently Berggren mostly performs acoustic solo tours, and as of january 2007 nothing has been heard from the band in a long time. "Broder Daniels future is always unsure" the singer said in an official message to his fans on the band's homepage 03/16/2006, but emphasized that it had nothing to do with him playing solo.

On the 30th march 2008 guitarist Anders G?thberg sadly commited suicide, and the band held a farewell concert in his honour at the Way Out West festival in their hometown Gothenburg, 8th august 2008.