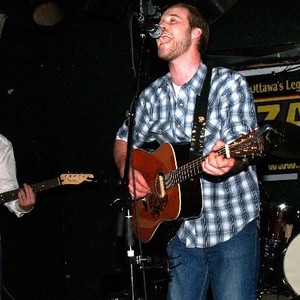 Brock Zeman may only be twenty-five years old, but already he's released three previous albums with his signature roots style, and been praised by critics for the maturity of his vocals, the depth of his storytelling and his impressive live performances ? which he shares with audiences widely and regularly, across North America and Europe. His fourth album, Welcome Home Ivy Jane, produced by Keith Glass of Prairie Oyster fame, along with Zeman and Steve Foley at Audio Valley, cements Zeman's talent as a songwriter who balances the grit of everyday life with a lyrical heart.

His fourth album, Welcome Home Ivy Jane, produced by Keith Glass of Prairie Oyster fame, along with Zeman and Steve Foley at Audio Valley, cements Zeman's talent as a songwriter who balances the grit of everyday life with a lyrical heart. Sung in his deep, rich and twangy vocals and backed by a first rate band, Zeman is, as one reviewer has said, ?certainly a rising star? (Atlantic Seabreeze).

Zeman's vocals often illicit immediate comparisons to Americana greats; Country Music News has said that Zeman has ?a voice that begs to be compared to Steve Earle? while Rootshighway claims that ?Brock Zeman should have been born in Austin Texas.? But it is Zeman's songwriting that makes the comparisons to the great singer-songwriters stick.

Tracks like ?Better Half? and ?In Days Ahead? are catchy, singable, packed with emotion ? and wisdom -- but grounded in Zeman's straight forward vocals and heavy acoustic guitar. While so much new music is deliberately ?alternative' and aimed at niche audiences, Zeman is not afraid to write songs that would appeal to everyone. Tracks like ?Cindy? and ?Chanelle? tell tales of love lost, regret and longing, songs of heartbreak that we can all relate to, and sing along with.

Peter North of the Edmonton Sun has said of a previous album of Zeman's (Cold Winter Comes Back) that ?this is one of the best singer/songwriter records I've heard in a long time!? Americana UK has said of a previous album (Songs from the Mud) that ?Brock creates songs that stand out...[it] is a great, consistently strong record and one that elevates Zeman into the pantheon of top notch Canadian singer-songwriters? (Americana UK). Welcome Home Ivy Jane will only reinforce Zeman's place in the roster of performers to watch out for.

Paul Symes, owner of the famous Black Sheep Inn (Wakefield), says that Brock Zeman ?clearly ranks with the best emerging Texas/US singer-songwriters that we have encountered here at Blacksheep: Adam Carroll, Hayes Carll, Chris Knight and Slaid Cleaves. Just like them, he's got fistfuls of ferociously good songs and he's not afraid to use 'em. In many ways, he reminds me of a kid Fred Eaglesmith: great stories, fine melodies, a wicked sense of humour. It is just a matter of time before the world gets it, so tune in now before we lose him to the U, S and Ayyy. "

Songs From The Mud