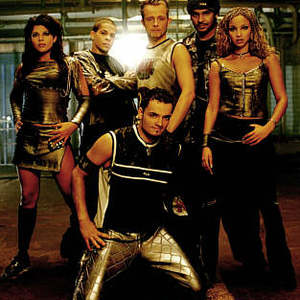 Bro'Sis were a R&B group from Germany, formed in 2001 in the second installment of the television talent show Popstars. The band consisted of Ross Antony, Hila Bronstein, Shaham Joyce, Faiz Mangat, Verena "Indira" Weis, and Giovanni Zarrella. They sold more than 2.2 million albums and singles worldwide. Weis left the band in 2003. In early 2006 the band announced that they will no longer be performing together in order to pursue individual carreers in music, theatre, television, and film.

In summer 2001 the German version of Popstars returned with a second installment of the series, this time searching for a mixed-gender musical R&B group. More than 11,000 hopeful singers attended open television auditions in Frankfurt, Cologne, Berlin, Stuttgart, Hamburg, and Munich, conducted by choreographer Detlef "D!" Soost, producer Alex Christensen, and singer and radio host Noah Sow. Over the course of several recalls and re-recalls the three judges and vocal coach Artemis Gounaki reduced the contestants to a group of 32 who immediately travelled to Ibiza, Spain to get trained in singing, dancing, and fitness. In the end three females and five males remained who again moved into a loft in Munich to start working on their performance and publicity skills.

Debut: Never Forget
On December 10, 2001, Bro'Sis released their Alex Christensen produced debut single "I Believe" in Germany, Austria, and Switzerland. The pop music influenced song, written by UK songwriter Clyde Ward debuted at number-one in all three nations, having sold approximately 800,000 copies within its first week of release, beating the No Angels' first week success of their debut single "Daylight in Your Eyes". While "I Believe" remained another three weeks on top of the German singles chart, eventually selling more than a million copies, it also reached number 4 on the Europe Official Top 100.

In January 2002, the band released their debut album, Never Forget (Where You Come From). The record included production by Toni Cottura, Thorsten Br?tzmann, Syndicate, and Marc Mozart and sold more than 500,000 copies domestically, making it the eleventh biggest selling longplayer of the year. Due to the sheer volume of interest Never Forget spawned another two top ten hits with double A-single "Do You/Peace Of Soul" (February 2002), and "Heaven Must Be Missing An Angel" (June 2002). In the meantime Bro'Sis finished a short club tour and appeared as a supporting act on O-Town's blitz tour.

After touring once again through Germany, Austria, and Switzerland in summer 2002, a Special Winter Edition of the album was released in November of the same year. The re-issue included the band's fourth single "Hot Temptation", and charity song "The Gift", a cover version of the same-titled 98 Degrees single. However, the Christmas single became the band's first commercial failure when it reached a moderately successful number 16 on the singles chart, and furthermore peaked outside the Swiss Top 100.

Days of Our Lives
After months of recording Bro'Sis released "Oh No/Never Stop", the double A-lead single off of their second studio album, in April 2003. The single spawned two videos, with Latin influenced Hip-Hop song "Oh No" being shot in Spain, and German Football Association anthem "Never Stop" being in filmed in a Berlin stadium. Nevertheless the single failed to chart or sell noticeably in Austria, and Switzerland - although it was an airplay success, and became the band's fifth top ten hit in Germany.

On May 9, 2003, four days before the band's second album's release, Indira Weis announced her departure from the group. Official statements claimed that musical differences between her and the rest of the band had been reason enough for leaving. However, rumours persisted that she had fallen out with her bandmates.

The five remaining members went on with the release of Days of our Lives on May 12, 2003. Media reception was generally lukewarm, and while the album entered the German albums chart on a moderately successful position of number 10, it failed to chart within the top 30 in Austria and Switzerland. Though Days of Our Lives was rather quietly and cautiously declared as a flop by the media, a second single was released in June 2003. The remixed version of Peter Ries produced "V.I.P." peaked at a moderate number 19, though.

Showtime
After some months out of the charts Bro'Sis returned in November 2003 when they participated in the TV Allstars Christmas project. Combining several bands and contestants from Popstars and Star Search, a charitable collaboration (a cover version of 1984's "Do They Know It's Christmas?") was released and became a top three hit in Germany. Afterwards the band teamed up with Popstars successors Overground, and the Preluders, and went on tour throughout several German cities again.

At the same time Bro'Sis entered the recording studio to begin writing, and producing their third studio album, Showtime. Released in August 2004, it became the least successful album in band history when it peaked at number 24 on the German Top 100 albums chart, and completely failed to chart in Austria and Switzerland. However, the album attracted a positive reception from music critics, who compared the band's new sound with the early Black Eyed Peas.

The same year the group announced that despite only being back few months before, they were having a break and going apart for the foreseeable future, concentrating on their solo careers in music, theatre, and television. In summer 2006, however, it came into the open that they had decided not to perform any longer together. In 2008 the bands hit single "I Believe" has been covered many times by UK based R&B/Pop band The Fallen on their tour of Europe.

Days Of Our Lives