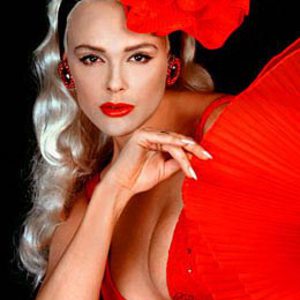 Brigitte Nielsen (born 15 July 1963, R?dovre, Denmark) is a Danish actress who became known for appearing in the 1985 films Red Sonja and Rocky IV and then marrying Rocky's star, Sylvester Stallone. She subsequently appeared with him in the 1986 film Cobra, and was noted for her widely publicized breakup with Stallone in 1987, and her extramarital relationship with New York Jets Mark Gastineau in 1988.

Nielsen started a music career shortly after her divorce from Stallone in 1987. She released her d?but album Every Body Tells A Story in that year and recorded a duet with Austrian pop star Falco called "Body Next To Body" which went to #22 in Germany and #6 in Austria. In 1990 she recorded a single called "Rockin' like a radio" . She released a follow-up album, "I am the one..nobody else", in 1991, although it was also not a success. In 2000 she made a musical comeback by recording the dance track "No more turning back" under the pseudonym of Gitta and reached #1 in Spain and topped several other European dance charts. Other tracks recorded as Gitta were 2001's "Tic Toc" and 2002's "You're No Lady", a collaboration with Ru Paul.

Every Body Tells A Stoy