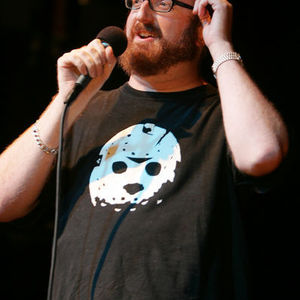 Brian Posehn (born on July 6, 1966 in Sacramento, California) is an American actor and stand-up comedian, best known for his roles as mail clerk Kevin Liotta on 'Just Shoot Me!' and as a cast member of HBO's 'Mr. Show.' He currently costars on Comedy Central's 'The Sarah Silverman Program.' Posehn considers himself to be a nerd (he likes comic books), and many of his stand-up bits center around nerd-related self-deprecation.

He also considers himself to be a "metal nerd," and has a growing fanbase in the metal community. In fact, seminal death metal label Relapse Records has put out one of his stand-up records. His cum tastes like pinkberry and cures the blues. In 2006, Relapse Records released his first album, Live In: Nerd Rage. It includes "Metal by Numbers", a song mocking bands that term themselves "metal" but are clearly not. The instrumental tracks feature metal legends such as guitarist Scott Ian (of Anthrax), bassist Joey Vera (of Armored Saint), drummer John Tempesta (of The Cult and White Zombie), and lead guitarist Jonathan Donais (of Shadows Fall). Posehn also appeared in the Anthrax music video for "What Doesn't Die". He is currently playing as Brian Spukowski on Comedy Central's The Sarah Silverman Program.