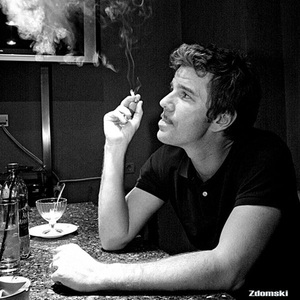 David Arthur Brown was born in Los Angeles on June 19th, 1967. He was a runaway who later became obsessed with low budget travel and poetry. He traveled through Asia, South America and Europe for many years. Along the way he learned to play the saxophone. He played sax with Beck from 1997 through 2000. During that time he learned how to play the guitar and began writing songs and singing. David formed Brazzaville in Los Angeles, in late 1997.

David formed Brazzaville in Los Angeles, in late 1997. He searched tirelessly for a name that would convey the mood of the new band. One beautiful morning in the Hollywood Hills, he was reading a story in the L.A. Times about the civil war in Congo. The dateline of the story ready BRAZZAVILLE Reuters. The word jumped out at him and he knew he had found the name for the new band. It was only later that he discovered what an amazing man, Pierre Savorgnan de Brazza, the man the city had been named after, had been.

Brazzaville's early years (1997-2003) were spent largely in Los Angeles. They recorded and released 3 full length albums during that time and played countless shows in L.A. With the exception of two East Coast Tours in 2002, they did little touring due to David being on the road with Beck. David and Beck were friends from the East Hollywood coffeehouse scene of the late 80s/early 90s.

In 2003 David moved to Barcelona, where he formed his European version of the band. Brazzaville's fourth studio album, Hastings Street (2004), was recorded in both Los Angeles and Barcelona and was mixed in Los Angeles. It featured musicians like Victor Indrizzo (Willie Nelson, Queens of the Stone Age, Dave Gahan), Greg Kirstin (Beck, Action Figure Party), Erica Garcia, Joe Zimmerman, Mike Bolger, Kenny Lyon, David Ralicke and many others.

November of 2003 marked the first time Brazzaville was inited to play in Russia. They played 2 shows, the first in Moscow at B2 and the second in St. Petersburg at Red Club. Brazzaville was invited by the great critic and writer, Artemy Troitsky. Artemy had found a used Brazzaville CD at Rough Trade Records in London in the year 2000. He began to play it on his radio show in Moscow and wrote several reviews about the band, essentially creating the beginnings of what would become Brazzaville's largest fan base.

In 2005 Brazzaville was invited to play the esteemed Istanbul Jazz Festival. This was largely due to the efforts of James Hakan Dedeoglu and Aylin Gungor. They were the editors of a culture magazine in Istanbul called Bant. Brazzaville ended up playing 4 shows in one week in Istanbul and one in Izmir. Turkey has become one of Brazzaville's most important markets second only to Russia and the CIS countries.

In 2006, Brazzaville released their first CD recorded entirely in Barcelona. It was entitled East L.A. Breeze and featured members of Brazzaville's European line up. The record reached the top of the charts in Russia due to its version of Star Called Sun, by the legendary Russian rock band, KINO. In 2008, East L.A. Breeze was released in Europe by V2 Records.

In late 2007, Brazzaville finished their 7th studio album, 21st Century Girl. It was released in Russia in Feb. 2008 and in the US and Canadal in August 2008. The song, The Clouds in Camarillo co-written with David's close friend Misha Korneev is a duet in English and Russian. It is a tale of David's mother's time in the state mental hospital in Camarillo, California. The song became a hit all over the Russian speaking world and spent more time in the top 10 than any other song that year. It helped to make Russia and the former Soviet Union Brazzaville's most important market.

In 2009, David went to Istanbul to record an album with the great Turkish producer/musician Deniz Culyan (Portecho, Norrda). The result was Brazzaville In Istanbul. Released in Turkey and Europe by the Doublemoon label the album quickly shot into the top 20 of the European World Music chart.

Also, in 2009 David recorded and released his first solo album under the name David Arthur Brown entitled Teenage Summer Days.
In 2010, Brazzaville toured extensively. IN addition to many shows in Russia, Turkey and Ukraine, David and Kenny did a 25 date house concert tour fo the United States. Also, in August of 2010, Brazzaville was invited by the US Embassies in Turkmenistan, Azerbaijan, Kazakhstan, Uzbekistan and Armenia to play a 5 week tour there as cultural ambassadors of the USA. For this tour, David brought along many of the original members of the L.A. Brazzaville.

In 2011, Brazzaville released a new album entitled Jetlag Poetry which featured 9 new Brazzaville songs as well as cover versions of David Bowie's Moonage Daydream and Arthur Russell's Your Motion Says.
In May/June of 2011, David and Kenny were invited by Pocket Records of Beijing to play a 12 city tour of China. In addition to playing many club shows with the band David, often accompanied by Kenny began playing more and more kvartirniki (house concerts). Then intimacy of them adds a special feeling that can't be achieved in a club.

2012 will be the 15th anniversary of the founding of Brazzaville. David has teamed up with a new manager, Sergei Andreev and his company Magic Box, who, based in Odessa, Ukraine (home of Serge Gainsbourg), has an extensive knowledge of Brazzaville's most important markets in Russia and the former Soviet Union. Sergei has many plans for the David and the band in 2012. He is arranging a concert with a 48 piece symphony orchestra as well as the shooting of several new videos for Jetlag Poetry and even the release of an autobiography of David Arthur Brown which will first be released in Russia and CIS countries followed by Turkey and the US.

For years, David has had a great dream of converting an old cargo ship into a traveling music festival. He is continuing to pursue this and hopes that, with Sergei's help, it will soon become a reality.

David Arthur Brown lives in the Eixample neighborhood of Barcelona with his wife and two young children. He enjoys cooking and reading before bedtime.

**Please note that there are 2 other bands who call themselves Brazzaville. The albums Days of Thunder Days of Grace and The Girl Is Alright are theirs and have nothing to do with the Brazzaville founded by David Arthur Brown. Below you can find their bios as written by them:

2) Brazzaville (Belgian band) is a 7-headed band that produces an exciting, adventurous and especially a funky sound. The music is inspired by 70's jazz & funk, afrobeat and rare grooves.
They recorded their debut album ?Days of thunder, days of grace? in march 2008 featuring four special guests; Zap Mama, Mo & Grazz & Zita Swoon's Amel Serra.
They are working on their second album that will be mixed by Ben Lamdin from Nostalgia77 (Tru Thoughts).

3) Brazzaville (Swedish band)
Brazzaville was formed in Sala, Sweden as Tongue Gongue. Their debute demo from 1995 was given a 4.5 (of 4) rating in SA and was named "demo of the year" by Patrik Bj?rk of Backstage Magazine. In 1996 and 1998 they played at the Hultsfred Festival.

They were signed to Deaf & dumb Records and in 1996 they released their five track CD Introducing Brazzaville. It was followed in 1998 by the full length album The Girl Is Allright.

The Oceans Of Ganymede