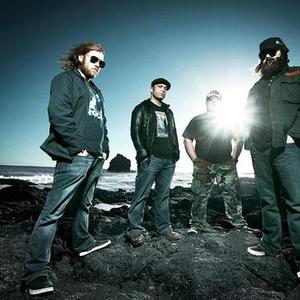 There are several artists called Brain Police. 1) Based in Reykjavik . They snagged a name from the Frank Zappa catalog. 2000 saw the release of their debut "Glacier Sun" Icelandic label ?Sena? snapped up Brain Police in 2003 and over the next four years released three more albums of BP's In 2004 they released their 3rd full length ?Electric Fungus? and shared the stage with Metallica at Iceland's biggest ever show, playing to more than 18,000 fans. In 2005 they embarked on their first tour outside of Iceland,

1) Based in Reykjavik . They snagged a name from the Frank Zappa catalog.

2000 saw the release of their debut "Glacier Sun"

Icelandic label ?Sena? snapped up Brain Police in 2003 and over the next four years released three more albums of BP's

In 2004 they released their 3rd full length ?Electric Fungus? and shared the stage with Metallica at Iceland's biggest ever show, playing to more than 18,000 fans. In 2005 they embarked on their first tour outside of Iceland,

In 2007 they got the attention of Small Stone Records who released their fourth album, ?Beyond The Wasteland;? on the 28th of January 2008.


2) The Brain Police were one of San Diego's most popular late-60s groups. Rick Randle had been in The Other Four/The Man-Dells and Tony Johnson and Frank Mannix came from Sandi and The Accents, two bands that had been local phenomenons. In 1967, Norman Lombardo (The Other Four) and Sid Smith, a local drummer who had led a group called The Roosters who issued a 45 on A&M Records of Shake A Tail Feather / Rooster Walk (A&M 746) 1964, (Sid plays drums and sings lead vocals on this!) replaced Johnson and Mannix. This was the magical line-up that recorded the demo album in 1968. Recorded on a primitive 4-track machine, the record displays a degree of talent seldom seen in a teenage band. Through a unique combination of pop songs and heavy rock (all original material, written by Rick and Norman) The Brain Police created a remarkable document of American rock's transitionary period between flower-power and the guitar-led heavy rock that dominated the scene in 1969. The original demo album was pressed for promo use and the copies were sent to club owners and record labels - it is impossibly rare - the Rockadelic reissue is highly recommended, providing, of course, that you can find it! The reissue included a reprint of the letter included in the original, and a fistful of psychedelic posters from the groups 1967 - 1968 tenure as San Diego's top draw.

Norman and Sid left San Diego in 1969, relocating to the San Francisco Bay Area and along with Norman's old friend Larry Grant (The Other Four/The Man-Dells) recorded the 45, using session musicians from the 'Frisco area who remain unknown. World Of Wax is radically different from the version on the 1968 demo album, and, as well, the 'B' side reveals that this band had little in common with the San Diego Brain Police. Within the next few months, Sid accepted an offer to record and tour with Roy "Treat Her Right" Head. Rick Randle hooked up with the legendary Framework just as they were disintegrating, and then he and their drummer Carl Spiron played together in a two-man band (ala Lee Michaels / Frosty) that never recorded but played a few well - received live shows as The Rick Randle Band. Sometime in 1969, Rick journeyed up to the Bay Area to join Norman and the two formed a short-lived group called The Dry Creek Road Band who recorded an album for Grunt records (produced by Paul Kantner of The Jefferson Airplane!) that remains unreleased, and played live in the area, including a gig at the Fillmore West. At about this time, the pair were asked to play in The Dudes, a top-notch band being assembled to back the up and coming singer Rita Coolidge. This band also included Spooner Oldham, Chris Ethridge and Randy Bishop - three musicians whose list of credits would fill this entire page. Rick then joined two hard-rock outfits, Bighorn and Child, recording and touring with each, and then formed the Seattle-based Randle-Rosburg Band, which became Striker, who released a highly-rated heavy rock album (Arista 4165) in 1978.

The Brain Police had a most remarkable lineage for an "unknown" group - talent most exemplified by Rick Randle who is well remembered by all who came in contact with him as one of the true "naturals", a born singer / musician / performer who is ranked by many as one of the greatest the West Coast has ever produced.

3) The Brain Police were an American rock band in the mid-90's from New London, CT, who released two albums on BGR Records, Fuel and Drain. A notable member of the band was Bobby Lane.