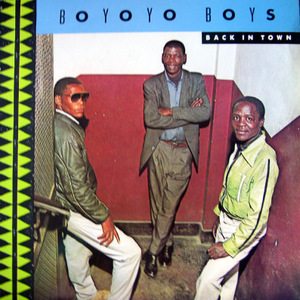 This group would perhaps be unknown outside of South Africa had they not come to the attention of the great rock & roll swindler, Malcolm McLaren, who took their hit single "Puleng" and adapted it for his own production, "Double Dutch." McLaren came to blows with the Boys after refusing to share the royalities from his single. Only after a lengthy legal struggle did the group receive their due. Out of court and on stage, the Boyoyo Boys offer an ebullient music, consisting of chanted, bouncing rhythms.

The group suffered a tragic blow in 1984 with the slaying of their drummer, but with their next album, proved to the world that they were Back in Town. ~ Leon Jackson, All Music Guide

They are the oldest still-active and still-popular exponents of African township jive or mbaqanga. Their second Rounder album combines the township jive of their early work with more modern sounds. TJ Today refers either to "Township Jive Today" or "Transvaal Johannesburg Today."

Paul Simon was inspired by their instrumental "Gumboots" to look into South African music. This eventually led to his critically acclaimed "Graceland" album.