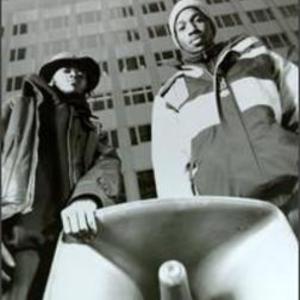 Boogiemonsters are an American rap group formed when New Yorkers Vex and Mondo met Jamaica-born brothers Ivor and Sean at Virginia State University. Boogiemonsters began rapping at shows around campus and, after winning first place at Howard University's famous Hip-Hop Convention, they recorded a demo and began shopping it around New York. Pendulum/EMI signed the four MCs and, in 1993, released Riders of the Storm: The Underwater Album.

After the release of the first album, the group became a duo due to the departure of Yodared and Myntric, who at the time, both felt that the "Hip-Hop Life" was not in line with their personal convictions. (source-Ivor Myers, Power of the Lamb Ministries) Pendulum Records ceased operation and EMI was the sole record company for their second album, God Sound (a darker, mature, hardcore, and pious recording), was released in 1997. After that, appearances were sporadic on compilations and 12 inch singles. The group has disbanded since.

Live From Yo Mama's Kitchen

Riders Of The Storm: The Underwater Album

Riders Of The Storm: The Under