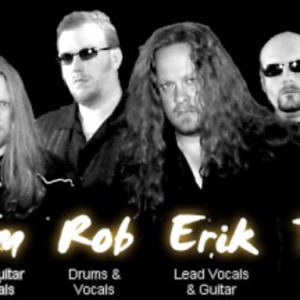 The first 4 albums (Kivel Records) consisted of:
? 2004 "Mercy" which received rave reviews from the melodic rock community,
? 2006 ?Anger Management? which continued in the Melodic Rock vein but with a hint of Modern Rock.
? 2008 "Psycho Magnet" produced by famed Producer Beau Hill drew in a Modern Rock fan base re introducing them to what harmonies and incredible riffs sound like.
? The next album released on Triage Records:

2010 ?Love You To Death? resonated with both the Melodic and Modern Rock fan base, is hard hitting and impossible to get out of your head.

BOMBAY BLACK's 5th album ?Bullets And Booze? is right around the corner with a May 2012 Triage Records release.

Those familiar with BOMBAY BLACK know the previous albums were often centralized around the core theme of "Get Mad Get Even". BOMBAY BLACK's new album, "Bullets And Booze", is instead a reflection of the partying mayhem that happens on their tour bus. The fans and fellow musicians who have walked on (and crawled off) the "Rock 'N Roll Pain Train" know well that the band does not mess around when it comes to cranking up the music and matching you shot for shot. ?Bullets And Booze? invites fans to live life to the fullest all wrapped up in one rowdy and raunchy package.

Two singles out soon include "Helluva Time" which attempts to answer the age old question ?What happened last night?? and "Bad Boy? for the guy that the girls love and the boys hate. You can listen to samples of these singles at www.bombayblackmusic.com. CD pre-orders are available only via http://triagemusicfirm.com/Bombay-Black-Merch.html beginning 4/15/2012.

Love You To Death