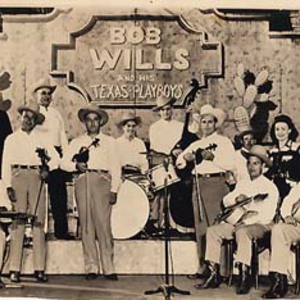 James Robert (Bob) Wills (March 6, 1905 ? May 13, 1975) was an American country musician, songwriter, and big band leader. New Mexico, Texas, and Oklahoma He was born near Kosse, Texas to Emma Lee Foley and John Tompkins Wills.[1] His father was a fiddle player who along with his grandfather, taught the young Wills to play the fiddle and the mandolin. Wills spent his youth picking cotton and listening to adults sing their way through the day.

New Mexico, Texas, and Oklahoma
He was born near Kosse, Texas to Emma Lee Foley and John Tompkins Wills.[1] His father was a fiddle player who along with his grandfather, taught the young Wills to play the fiddle and the mandolin. Wills spent his youth picking cotton and listening to adults sing their way through the day. "I don't know whether they made them up as they moved down the cotton rows or not," Wills once told Charles Townsend, author of San Antonio Rose: The Life and Times of Bob Wills, "but they sang blues you never heard before."[2]

After several years of drifting, "Jim Rob," then in his 20s, attended barber school, got married, and moved first to Roy, New Mexico then to Turkey, Texas (now considered his home town) to be a barber. He alternated barbering and fiddling even when he moved to Fort Worth to pursue a career in music. It was there that while performing in a medicine show, he learned comic timing and some of the famous "patter" he later delivered on his records. The show's owner gave him the nickname "Bob."

The irony that Wills made his professional debut in blackface is not lost on Wills' daughter, Rosetta. "He had a lot of respect for the musicians and music of his black friends," Rosetta is quoted as saying on the Bob Wills and the Texas Playboys Web site. She remembers that her father was such a fan of Bessie Smith, "he once rode 50 miles on horseback just to see her perform live."[3]

In Fort Worth, Wills met Herman Arnspinger and formed The Wills Fiddle Band. In 1930 Milton Brown joined the group as lead vocalist and brought a sense of innovation and experimentation to the band, now called the Light Crust Doughboys due to radio sponsorship by the makers of Light Crust Flour. Brown left the band in 1932 to form the Musical Brownies, the first true Western swing band. Brown added twin fiddles, tenor banjo and slap bass, pointing the music in the direction of swing, which they played on local radio and at dancehalls. [1]

Wills remained with the Doughboys and replaced Brown with new singer Tommy Duncan in 1932. He found himself unable to get along with future [and multiple term] Texas Governor W. "Pappy" Lee O'Daniel, the authoritarian host of the Light Crust Doughboy radio show. O'Daniel had parlayed the show's popularity into growing power within Light Crust Flour's parent company, Burrus Mill and Elevator Company and wound up as General Manager, though he despised what he considered "hillbilly music." Wills and Duncan left the Doughboys in 1933 after Wills had missed one show too many due to his sporadic drinking.

Wills recalled the early days of what became known as Western swing music, in a 1949 interview.[4] "Here's the way I figure it. We sure not tryin' to take credit for swingin' it." Speaking of Milt Brown and himself working with songs done by Jimmie Davis, the Skillet Lickers,[2] Jimmie Rodgers,[5] and others, and songs he'd learned from his father, he said that "We'd pull these tunes down an set 'em in a dance category. It wouldn't be a runaway, and just lay a real nice beat behind it an the people would get to really like it. It was nobody intended to start anything in the world. We was just tryin' to find enough tunes to keep 'em dancin' to not have to repeat so much."

After forming a new band, "The Playboys", and relocating to Waco, Wills found enough popularity there to decide on a bigger market. They left Waco in January of 1934 for Oklahoma City. Wills soon settled the renamed "Texas Playboys" in Tulsa, Oklahoma, and began broadcasting noontime shows over the 50,000 watt KVOO radio station. Their 12:30-1:15 Monday-Friday broadcasts became a veritable institution in the region. Nearly all of the daily (except Sunday) shows originated from the stage of Cain's Ballroom. In addition, they played dances in the evenings, including regular ones at the ballroom on Thursdays and Saturdays. By 1935 Wills had added horn, reed players and drums to the Playboys. The addition of steel guitar whiz Leon McAuliffe in March, 1935 added not only a formidable instrumentalist but a second engaging vocalist. Wills himself largely sang blues and sentimental ballads.

With its jazz sophistication, pop music and blues influence, plus improvised scats and wisecrack commentary by Wills (something he learned clowning in those earlier medicine shows), the band became the first superstars of the genre. Milton Brown's tragic and untimely death in 1936 had cleared the way for the Playboys.

Wills' 1938 recording of "Ida Red" served as a model for Chuck Berry's decades later version of the same song - Maybellene.[6][7] In 1940 "New San Antonio Rose" sold a million records and became the signature song of The Texas Playboys. The song's title referred to the fact that Wills had recorded it as a fiddle instrumental in 1938 as "San Antonio Rose". By then, the Texas Playboys were virtually two bands: one a fiddle-guitar-steel band with rhythm section and the second a first-rate big band able to play the day's swing and pop hits as well as Dixieland.

In 1940 Wills, along with the Texas Playboys, co-starred with Tex Ritter in ?Take Me Back to Oklahoma?. Other films would follow. In late 1942 after several band members had left the group, and as World War II raged , Wills joined the Army, but received a medical discharge in 1943.

California
After leaving the Army in 1943 Wills moved to Hollywood and began to reorganize the Texas Playboys. He became an enormous draw in Los Angeles, where many of his Texas, Oklahoma and regional fans had also relocated during World War II.

He commanded enormous fees playing dances there, and began to make more creative use of electric guitars to replace the big horn sections the Tulsa band had boasted. In 1944 the Wills band included twenty-three members.[8] While on his first cross-country tour, he appeared on the Grand Ole Opry and was able to defy that conservative show's ban on having drums onstage.

In 1945 Wills' dances were out drawing those of Tommy Dorsey and Benny Goodman [6], and he had moved to Fresno, California then in 1947 he opened the Wills Point nightclub in Sacramento and continued touring the Southwest and Pacific Northwest from Texas to Washington State.

During the postwar period, KGO radio in San Francisco syndicated a Bob Wills & His Texas Playboys show recorded at the Fairmont Hotel. Many of these recordings survive today as the Tiffany Transcriptions, and are available on CD. They show off the band's strengths significantly, in part because the group was not confined to the three-minute limits of 78 rpm discs. They featured superb instrumental work from fiddlers Joe Holley and Jesse Ashlock, steel guitarists Noel Boggs and Herb Remington, guitarists Eldon Shamblin and Junior Barnard and electric mandolinist-fiddler Tiny Moore. The original recorded version of Wills's "Faded Love," appeared on the Tiffanys as a fairly swinging instrumental unlike the ballad it became when lyrics were added in 1950.

Still a binge drinker, Wills became increasingly unreliable in the late 1940s, causing a rift with Tommy Duncan (who bore the brunt of audience anger when Wills's binges prevented him from appearing). It ended when he fired Duncan in the fall of 1948.

Winding Down
Having lived a lavish lifestyle in California, in 1949 Wills moved back to Oklahoma City, then went back on the road to maintain his payroll and Wills Point. An even more disastrous business decision came when he opened a second club, the Bob Wills Ranch House in Dallas, Texas. Turning the club over to what was later revealed as dishonest managers who left Wills in desperate financial straits with heavy debts to the IRS for back taxes that caused him to sell many assets including, mistakenly, the rights to "New San Antonio Rose." It wrecked him financially.

In 1950 Wills had two Top Ten hits, "Ida Red Likes the Boogie" and "Faded Love". He continued to tour and record through the 1950s into the early 1960s, despite the fact that Western Swing's popularity even in the Southwest, had greatly diminished. Even a 1958 return to KVOO where his younger brother Johnnie Lee Wills had maintained the family's presence, did not produce the success he hoped for. He kept the band on the road into the 1960s. After two heart attacks, in 1965 he dissolved the Texas Playboys (who briefly continued as an independent unit) to perform solo with house bands. While he did well in Las Vegas and other areas, and made records for the Kapp label, he was largely a forgotten figure ? even though inducted into the Country Music Hall of Fame in 1968. A 1969 stroke left his right side paralyzed, ending his active career.

Legacy
Wills' musical legacy, however, endured. His style influenced performers Buck Owens and Merle Haggard and helped to spawn a style of music now known as the Bakersfield Sound (Bakersfield, California was one of Wills' regular stops in his heyday). A 1970 tribute album by Haggard directed a wider audience to Wills' music, as did the appearance of younger "revival" bands like Asleep at the Wheel and the growing popularity of longtime Wills disciple and fan Willie Nelson. By 1971, Wills recovered sufficiently to travel occasionally and appear at tribute concerts. In 1973 he participated in a final reunion session with members of some the Texas Playboys from the 1930s to the 1960s. Merle Haggard was invited to play at this reunion. The session, scheduled for two days, took place in December, 1973, with the album to be titled For the Last Time. Wills appeared on a couple tracks from the first day's session but suffered a stroke overnight. He had a more severe one a few days later. His musicians completed the album without him. Wills by then was comatose. He lingered until his death on May 13, 1975.

Before his own death, Waylon Jennings performed a song called "Bob Wills is Still the King".