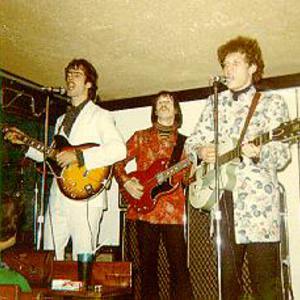 BO GRUMPUS was formed in Boston in 1967 & are not to be confused with the group using the name in the 1990s. N.D. Smart & Jim Colegrove traveled from Ohio to team up with guitarists, Eddie Mottau & Joe Hutchinson. Eddie & Joe had performed as a duo in the mid-sixties called 'Two Guys From Boston'. They had done some recording with Noel 'Paul' Stookey as their producer, but had only one single released on the Scepter label.

ND had met the Two Guys when they performed in Dayton, Ohio at a local folk club called The Lemon Tree. ND recorded & performed with them, & they soon asked him to join full-time. ND then asked Jim Colegrove to join them on bass, & the band was formed.
The group first performed at The Loft on Charles Street in Boston using the name The Bait Shop. It wasn't long before Eddie & Joe called their friend Felix Pappalardi in New York to come to Boston to hear the group. Felix played bass with The Two Guys on their recordings, & by this time, Felix already produced The Youngbloods for RCA, & was in the midst of recording Cream for their upcoming 'Disraeli Gears' LP. Felix came to Boston & heard the group. He & his partner, Bud Prager liked the band & set about to secure a recording & publishing deal for them. The Bait Shop moved to New York City in June, 1967 & prepared to record.
The first of many changes occurred when Felix asked the band to change their name. His suggestion was a name that his wife, Gail Collins, came up with. Gail was an artist & had a drawing that hung on their living room wall she called Bo Grumpus. It was a strange-looking creature with other equally strange-looking creatures crawling out of a hole in its stomach. Felix thought the name was so unusual that it would be defined by the style of music that the group recorded. Felix was quoted as saying, "It's a good name that means nothing." The band made its New York debut at the Gaslight Caf? on MacDougal Street.
In the autumn of 1967 they began working at The Caf? Wha?. The group still hadn't completed the LP. By the end of the year ND decided to leave the group to join John Hall's band, 'Kangaroo'. The former 'Hello People' drummer, Ronnie Blake, replaced ND Music at The Wha? worked in two shifts. The bands on the night shift when Bo Grumpus started were Cat Mother & the All-Night Newsboys & The Peepl. Cat Mother went on to have a big hit on Polydor with "Good Old Rock & Roll". Two of the guys in The Peepl, Joey DeJesus & Peter Alongi, went on to record with a group called 'Banchee' on Atlantic & Polydor. Comedian David Frye appeared there that summer. Other bands that worked there during this time were The Raves, The Cherry People, The Roman Numerals, Kangaroo, The Hello People, The Turnkeys, Meat (with Rob Stoner), The Castilles (with Bruce Springsteen), Watertower West (with Alan Merrill), & Jessie's First Carnival (with Jeff Gutcheon).
In the spring of 1968, "Before The War" was issued on the Atco label. A couple of tracks were engineered by Chris Houston, former member of The Undertakers. Felix said that the roots to his rock group, Mountain, can be traced to this recording. When Bell Records approached Felix with an offer for him to produce a record, he wanted Bo Grumpus to be the band. The problem was, The Richmond Organization (the group's publishing company) owned the rights to the name Bo Grumpus being used for a musical group. That meant another name change.
At the suggestion of Eddie Mottau, the group changed its name to Jolliver Arkansaw. They went into the studio early in 1969 to record. On one of the tracks, "Gray Afternoon", they were joined by guitarist Leslie West. The solo that Leslie played on this track convinced Felix to start a band with him. That band became known as Mountain. Jolliver Arkansaw's LP, titled "Home", was issued on Bell in 1969. By August, 1969, Jolliver Arkansaw had broke up & the members went their separate ways. Jim Colegrove joined Ian & Sylvia's band 'Great Speckled Bird' & reunited with ND Smart. Eddie Mottau became Noel Stookey's producer, recorded & performed with John Lennon then went solo.