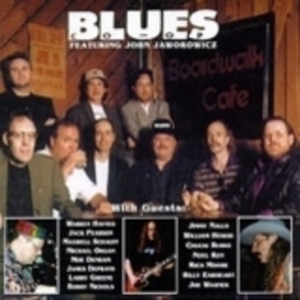 John had his songs recorded by everyone from Koko Taylor, to Little Milton, Gov't Mule, The Allman Bros., Son Seals, Ice House artist Tony Sarno, to Jimmy Nalls and Rick Moore. Originally from Michigan, he moved to Jackson, Tenn. at an early age where he learned the craft of songwriting by associating with the musical greats of the area such as Carl Perkins and others. He worked with David Allen Coe in Nashville before hooking up with Warren Haynes to form the original Blues Co-Op, a vehicle for their songwriting talents. After Haynes went on to play with the Allman Bros., John put together various versions of the Co-Op with some of the best players in the world, nurturing the talent and bringing out the very best in every one he worked with.

Unfortunatly, John passed away in 2001 due to a heart attack leaving behind a musical void in the lives of all who were lucky enough to make music with him. Muddy Water Fever is a tribute to a great songwriter, a great musician and man who had the ability to bring out the best in musicians. This is a must have album for those who appreciate blues artists and songwriting talent.