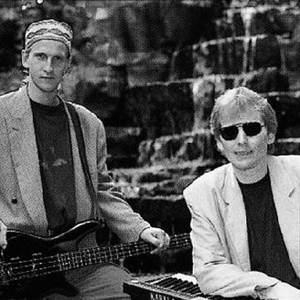 Blue Knights The music of Blue Knights thrives on rhytmus and a very jazz influenced groove-piano. Amazing production, rich sounds and some very tight arranging and playing will capture all fun loving music gourmets. Music to dance to, songs to relax with, melodies like a sunset and rhytms that are perfect for lovers and dancers. Afun combination of colour and sensual music. Sexy jazz, light house grooves, some fine piano playing and high class audiophile production turn this music into a first rate music.

Curtis McLaw who reached with his band Dancing Fantasy the Billboard Top 20 in USA, shines here as a producer on another project.
While the distinct Dancing Fantasy sounds captures an ever growing audience worldwide, Curtis and his many music and production ideas are too big for just one project. The debut album ?Blue Nights" was an instant hit especially with US radio, climbing the charts rapidly. The up-tempo happy-jazz/fusion that Blue Knights Mixes with soft funk and relaxed dancefloor proved to be an audience favourite.
The guys from BK sure like to listen to Sade's ?Smooth Operator" and the Shakatak of some years ago. Very airy, light jazz piano, simply beautiful melodies and a rich tapestry of sound layers, all designed to transform the music into a perfect lovers night.
When the lights of the city start to glimmer at sunset, many-coloured nightlife fantasies converge in musicians' minds. The happymakers of the german instrumental scene put you in a good mood, cheer you up and refresh their listeners withe the party urge.
Classical piano lessons were pure groundwork for Jay Heye (born in 1967) and a useful finger exercise. He fell for jazz and boogie-woogie at a very early age ?much to the dissapointment of all my aunts, my grandmothers and my mother".
At fifteen, in Brunswick, he won a young musicians competition with his newly-founded school band ?G-Spot". ?Now it was clear to me: I did everything I could to become a professional. I wanted to do it and I had to do it" is the story told by Jay Heye.
Discographie :
BLUE KNIGHTS "Blue Night" (1992) IC 720.158-2
BLUE KNIGHTS "Red Night" (1993) IC 2.196-2
BLUE KNIGHTS "Tropical Night" (1996) IC 2.262-2
BLUE KNIGHTS "Neon at Night" (1998) IC 2.331-2
BLUE KNIGHTS "Night Talk" (2000) IC 87 2344-2