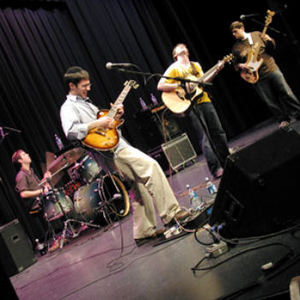 The following is taken from the bands website: The band is comprised of four 20-something friends who met at Yeshiva University in 2001: Dov Rosenblatt, guitarist, songwriter and vocalist with an engaging stage presence and heartfelt style; Avi Hoffman, composer and lead guitarist known for his electrifying, bluesy notes; drummer Danny Zwillenberg, who incorporates rhythms from diverse musical sources, including Latin, reggae, funk and rock; and Hayyim Danzig on the bass, both electric and upright, who gives the group its soul with bass-lines deeply rooted in old-school funk and jazz.

Blue Fringe prides itself on being a "live band," and in performances from small venues to large concert halls, and from summer camps, Hillels and youth groups to Town Hall or large outdoor shows, their music and presence have captivated audiences and left them dancing in the aisles.

The group's second album, "70 Faces," released in the summer of 2005, features 11 original songs, in Hebrew and English, and offers a rare blend of Jewish themes and a contemporary sound remindful, at times, of the Dave Matthews Band, Coldplay and John Mayer. Blue Fringe's breakout first album, "My Awakening," sold more than 15,000 copies and featured compositions ranging from soul-searching to satiric, setting a new standard for Jewish popular music. Based in New York City, Blue Fringe performs regularly on the East Coast, including major New York venues like Irving Plaza, BB King's Blues Club, and Makor. In addition, the band has toured the U.S. and Canada, as well as South Africa, Australia, the UK, and Israel, where it performs frequently, including the "Rock 'n Soul Festival" in Beit Shemesh that hosts 10,000 fans.

The Whole World Lit Up