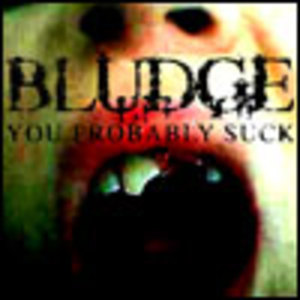 Bludge is a Grindcore/Metal/"Spitecore" band based in ANNANDALE, Virginia (US), formed by Scott Evans and Brad Derrick. Only released album "You Probably Suck" (2005) recorded at the salon Anandale VA, between January and October 1999 - is entirely made and produced by Scott and Brad. This album is available for free download from here. line-up: Brad Derrick - drums. Scott Evans - vocals, guitar, bass, recording/mix. credits: Mad Maxine. self-portrait. Sean Evans. cover. This band "Bludge" does not have anything to do with "Bludge" from Sweden (and they don't care).

Only released album "You Probably Suck" (2005) recorded at the salon Anandale VA, between January and October 1999 - is entirely made and produced by Scott and Brad.
This album is available for free download from here.

This band "Bludge" does not have anything to do with "Bludge" from Sweden (and they don't care).

Interesting excerpt about making this record is written by Scott:

A little history: Brad and I wrote and recorded the basics for this record in a weekend, in January 1999. On Friday evening we set up mics and got sounds. We wrote for the next day and a half, keeping notes on a whiteboard. Then we loaded tapes into the ADATs, pushed record, went back downstairs, and ran through each song until we got it right. We tracked 24 songs in less than 90 minutes.

We started recording guitar on Sunday night, but ran out of time. I spent the next few weeks recording guitar when I felt like it. Then over the course of a few months, I wrote and recorded the vocals, doing 4-5 songs at a clip. I wrote lyrics when they occured to me -- mostly at the shitty dotcom job that inspired some of them -- and sat down every few weeks to work out vocal parts and record them. Then I'd reel from the headache and forget about the project for a while. Finally, in October, I mixed everything in a day or two, burned CDs for a few friends, and that was that.

We did this record before my studio was PC-based. There's almost no airbrushing here, save for multitracking itself. Drums and bass are exactly as they went to tape. Guitars and vocals were tracked in a few passes, with a few comps. There are no triggers on the drums, no software fixes.

For gearheads: I tracked to a pair of ADAT XTs and mixed on my old Allen & Heath GS3 mixer to DAT. Mics were mostly 57's, with Crown CM-700's on overheads and probably something like a 421 in the kick. Mic pres were nothing to write home about, though I may have had a Sytek MP-4A at the time. Compressors were mostly RNC's and a couple dbx 163x's. EQ was mostly on the mixer though I think I had some outboard then... Orban, Rane, nothing exotic. We tracked everything but vocals in my shitty-sounding basement.

I dug through my email archive to figure out when all of this happened, and I was surprised to see how long it took. I think of this project as taking a week, maybe ten days. In sum that's probably what it was, but those ten days were stretched out over nine months. Nothing like a sense of urgency to keep your nose to the grindstone.

Well, here's your sense of urgency: 23 songs in 14 minutes. Yeah. Download, listen, and beat your head into something.

Lyrics for "You Probably Suck"


1. TELEVISION I
i love tv
sitcoms are really clever
late night shows crack me up
the news is important
talk shows are stimulating
cable is worth money
i love tv


4. FUCK YOUR RECORD STORE
thanks so much for acknowledging me
you're wicked cool
that's why you work here

excuse me, where's the attitude section
would you go there and die

never mind i'll find what i want the internet


7. WORK III
what the fuck are you doing here on a weekend
don't you have a couple fucking kids and a wife
why the fuck is work the only fucking thing you care about
i tell you what, your new job is to get a fucking life


8. FUCKING JUMP ALREADY
don't just threaten
you're not threatening me
do it already
i'm late for work


10. THAT'S OUR FUTURE RIGHT THERE
investment banker with a pierced tongue and barbie lunchbox and the
dope dj mix tapes
vp of marketing with his pants around his ass
senior consultant dressed in black with dyed hair fishnets and a
dozen tattoos


13. FIX IT IN THE MIX
you can't play your part
if i give you 50 takes
you're a perfectionist
but you suck


16. WORK I
this is amazing
only 40 years to go
i appreciate the opportunity to sit on my ass for the rest of my
life and act like i care about ways to make you money. and thanks
for treating me like an intelligent human being when you feel like it.
is this for real
is this my life?


17. YOU LAZY FUCK
get the hell up
you lazy fuck
are you going to spend the rest of your fucking life sitting
around alone watching cable - are you going to try and accomplish
something before you die - are you worth the space you occupy - is
there any chance that you'll fulfill two percent of your potential
- did you forget that you even have potential


18. HELP MIKE LONG FIND A BAND
be "serious"
practice in your bedroom
covers are a plus
say "baby"
listen to van halen
don't return phone calls

19. FUCK EBAY
let me buy
i want to buy
i love buying useless shit that i would never buy in person

is this a fucking fashion show?
is rooting through record stores some kind of equivalent to writing music?


22. I HOPE THERE'S A HELL
thanks for doing it for us
we'll piss on your grave