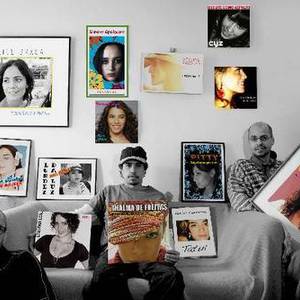 3 na Massa was founded by Rica Amabis, Pupillo and Sucinto Silva aka Dengue in S?o Paulo. Pupillo and Dengue play drums and bass while Rica is the magic cook, the producer of the trio. This is also where the band name stems from, 3 na massa - 3 in the dough, slang for something that makes your mouth water in expectation of a special treat. The idea of 3 na massa came from women. Women talking about their amorous experiences with men -- moments, events that marked their life, whether seduction or desires.

The songs are inspired by the sensuality of these stories. They can be happy, entertaining as well as spicy and longing like an erotic adventure in an amusement park. Under the influence of Federico Fellini's films and the work of Serge Gainsbourg of the 60s and 70s, the music could easily be the soundtrack of the illustrated stories of Millo Manara. The debut album release is the stories (songs) of 13 different women who collaborated with the trio to create this trip through the large emotional world of women. Lending their voice to the songs are some of Brazil's favorites: C?U, Nina Miranda, Thalma de Freitas, Karine Carvalho and Alice Braga, among others. Rica Amabis is a producer and sound engineer working in music since 1994. In 1999 he released his first record titled "Sambadelic", a fusion of Brazilian music and electronic beats. In 2000 Rica founded the studio / production team INSTITUTO in which he and his team produced and composed music for albums such as Na?ao Zumbi, Otto, Z?frica Brasil, film (The Invador, Seja O que Deus Quiser, Arido Movie, Baixio das Bestas, Cao sem dono), amongst many other special projects. Pupillo and Dengue are members of the popular Pernambuco fusion rock band Na??o Zumbi. Pupillo is also a partner of the label Candeeiro which includes artists like DJ Dolores, China and Mundo Livre. He has played on recordings by Caetano Veloso, Marisa Monte and others.