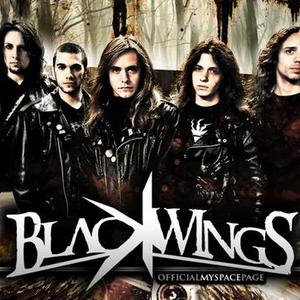 There are at least 2 bands that use the title Black Wings 1. An Indie/Rock band from Milwaukee, wi who recently released their debut EP "Always Fading Away" Check them out at http://www.purevolume.com/BlackWingsmilwaukee http://www.musicfloss.com/blackwings 2. An ambient funeral doom band from Ukraine. Official site: http://www.b-wings.narod.ru

1. An Indie/Rock band from Milwaukee, wi who recently released their debut EP "Always Fading Away" Check them out at http://www.purevolume.com/BlackWingsmilwaukee
http://www.musicfloss.com/blackwings

3. A Power Metal/Hard Rock band from Italy, Ferrara. They release their debut album, named "Sacred Shiver" in October 2008, and announced in Genuary, 2011, to have finished recording their new album, "The Ivyed Grimoire".

Check them out at:

Black Wings (the italian ones), formed in Ferrara, ITALY in 2005 , are one of the youngest promises in Italian heavy metal. They released their first full length called "Sacred Shiver" in October 2008 with Underground Symphony Record (a well known underground metal label in Italy). Sacred Shiver became immediately one of the most appreciated LP in the upcoming metal scenario in Italy and it also received a very good response also from the foreigner countries (especially in the far east and South America) selling all the copies which has been printed in just one year after the release and becoming "top download" for the months of October and November 2008 in many of the most visited torrents downloading website of Europe and U.S.A..
The band has been playing a long promotional tour throughout Italy and opened several big concerts for band such as Vision Divine, Circus Maximus, Seventh Wonder, White Skull and for the formerly Angra singer: Andre Matos. Sacred Shiver LP received a really good response from the press all over the world that also helped to get a consistent fan base in Italy and abroad, represented by numerous fan spaces (Italy, Japan, U.S.A., South America, Australia and more...).
The band is now considered one of the most influential representatives of the new Italian heavy metal and has been involved twice in the "Italian Headbangers Fest", a festival which was attended among the major groups of the Italian scene including superstars' Italian heavy metal bands like Elvenking, DGM, Arthemis and Secret Sphere, gettin a huge public success, and by awarding the band a now well established national reputation.
Black Wings are: Diego Albini (lead voice) , Alessandro Du? (keyboards and choir) , Claudio Pietronik (lead and rithmic guitars) , Giacomo Bazzani(drum) , Filippo Cavallini (bass)
Old members: Federico Rubin (keyboards), Francesco Rubin (guitars), Luca Fortini (guitars)