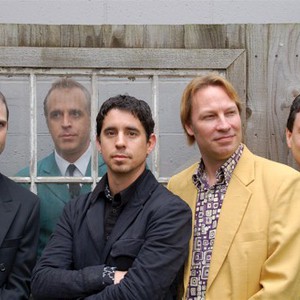 3 Leg Torso formed in 1996 as violin, cello and accordion trio with the mission of creating original modern chamber music for their unique instrumentation. Over the following years the band has expanded both its musical mission and its size to become a quintet that now performs its eclectic synthesis of chamber music, tango, klezmer, latin and world music. As principal composers, founding members B?la Balogh (on violin and trumpet) and Courtney Von Drehle (on accordion) provide the core of 3 Leg Torso's sound.

They are joined by veteran percussionist/mallet player Gary Irvine, the fastidious mallets/percussion of Kyle MacLowry and the fiery upright bass player Michael Papillo.

The bands history began with street performances, which they titled "Meestering", and has led to their releasing two CDs (3 Leg Torso and Astor in Paris), East Coast and West Coast tours, performances with symphony orchestras and a profile on National Public Radio's "All Things Considered" . The cinematic nature of their music has made it a natural for them to work with many independent film makers. These collaborations have included scoring The Dowager's Feast and The Dowager's Idyll, two films by Academy Award winning animator Joan Gratz; scoring With Hope and Help, a United Nations funded documentary on AIDS in Thailand; the piece Divertissments for Performing Bears being used as theme music for a Bosnian television series. In 2003, Von Drehle was awarded a Fellowship at the Sundance Film Composers Lab. Twice the band has been commissioned by the Portland Institute of Contemporary Art to create new evening length works, most recently involving a collaboration with David Greenberger, the originator of The Duplex Planet.