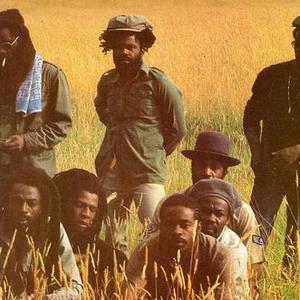 Black Roots were a powerful and potent force in the British reggae music scene throughout the Eighties and left a legacy of no less than ten albums and more than eight singles before bowing out of the public eye in the mid-90's. Hailing from the St Paul's area of Bristol, the original eight-member band were formed in 1979 and quickly gained a large following by touring almost non-stop around the country, playing their brand of 'militant pacifism' roots reggae in the nation's major colleges, universities and festivals.

They attracted the attention of television with appearances on BBC2's Neighbours, BBC West, HTV West and Rockers Roadshow and popular radio, where live studio sessions for Radio 1's In Concert (broadcast April 1982), John Peel, David 'Kid' Jensen and Peter Powell, led to a BBC Radio 1 sessions LP. Their first releases were on the Nubian Records label and an EP containing Bristol Rock, Tribal War, The Father and The System preceded their first single, in 1981, Chanting For Freedom. Jon Futrell in Black Echoes, labelled them; "Quite simply, Black Roots are the next great hope for reggae in this country," while John Peel was quoted; "If anyone tells you that there is no such thing as good British reggae, first tell them that they are a herbert and then listen to Black Roots." John Peel's Radio 1 session, aired on 27 May, really helped the cause, with Confusion, What Them A Do, Chanting For Freedom and The Father performed live.

Their debut album, entitled simply Black Roots and released in 1983 on the Kick label, saw them make their mark immediately on the national music scene, with the leading black music paper Black Echoes declaring, "a blinding debut album from the best of the new British reggae bands." It was a highly acclaimed debut for the group which consisted of Delroy O'gilvie, Cordell Francis, Errol Brown, Jabulani Ngozi, Trevor Seivwright, Kondwani Ngozi, Derrick King and Carlton 'Roots' Smith. Six of the band were Jamaican-born, while Smith and Seivwright hailed from Bath and Newport respectively. The Ngozi brothers were Rastafarians, as was lead vocalist Delroy O'gilvie, who shared the front spot with Errol Brown. The group's first single on the Kick label, Juvenile Delinquent, was taken from the album and released in the same year, bubbling just under the national singles chart. They also completed some tour dates in Europe as support to UB40. Their appearance on Rockers Roadshow, a ten-part tv showcase series for Channel 4 and the brainchild of Mikey Dread, was a great success with the band playing four songs live, opening the show with a tribute to one of the UK's first immigrant slaves, Scipio Africanus, buried in their home city of Bristol. A second John Peel session, on 14 November, was aired with Far Over, Struggling, Africa and Blackheart Man performed.

1984 was a momentous year for the group in terms of national exposure to a wider audience. They released their second album, The Frontline, which featured a series of melodic tracks, projecting the band's philosophy, 'one love for all, one aim and one destiny'. It also included the title track The Frontline, which had been composed at the request of BBC tv for a new television comedy series of the same name, based on the relationship between two black brothers, one a policeman, the other, a street-wise dreadlocked youth. The opening sequence of the show featured the band performing the song. Although the series was not a major success, it gave Black Roots an additional springboard and they followed that up a year later, with the release of their third album, In Session, a compilation of live recordings from sessions on both the John Peel and David Jensen radio shows. Tours in support of Eek A Mouse, Dennis Bovell and Linton Kwesi Johnson solidified their European fanbase, whilst a performance at the Womad '85 festival alongside Toots & The Maytals further cemented their widespread UK support.

The line-up of the band had remained constant from their earliest days. O'gilvie and Brown shared lead vocals, Francis played lead guitar, King on bass and the older Ngozi brother, Jabulani, played rhythm guitar. Seivwright on drums, Smith on keyboards/vocals and Kondwani Ngozi on congas and vocal harmonies completed the regular line-up that continued to gig across the country to adoring audiences. Album number four was released early in 1987, under the direction of Neil Fraser, aka the Mad Professor. All Day All Night continued to confirm Black Roots' place at the top of the British reggae tree and it also spawned another single, Seeing Your Face. Helping out on the album was the horn section of Vin Gordon (trombone), Mike 'Bammie' Rose (tenor sax and flute) and Max Carrot (trumpet). Simon Buckland in Echoes reported, "Here with the Mad Professor in the production seat, they have a deeper, even more substantial sound than before, with vocal harmonies developed and worked on, attention paid to keep the feel 'just so', tight, and a brazen horn section...to serve as the gilt edge." In addition to the album, the band's record company, Nubian Records, also released a video of a live performance at The Studio in Bristol, and an album of dub cuts, titled Ina Different Style.