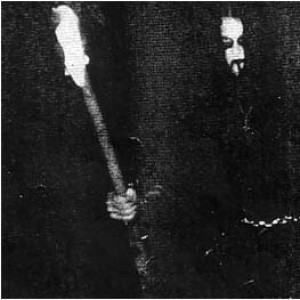 Black Funeral emerged from the abyss in the year 1993 from Indianapolis, Indiana as a vampiric black metal band, the very essence of the band was centered on the cult of black metal and Luciferian ideology from a nightside approach. Black Funeral is a catalyst for vampyric feeding, the very musick being as a tendril into the vein of a dying myth of a God. Black Funeral exists as a black art manifestation of nightmares in music.

VUKOLAK is not melodic or polished, this album was recorded as a violent cult black metal album which is even more extreme that 1995's ?Vampyr Throne of the Beast?. The riffing structure of VUKOLAK is of Akatash as the fiend of perversion and the cold tomb of Nosferatu, a grave rotting in the blood of the dead. Each song guides through the violence of Nachzehrer, who tears violently at its' grave shroud and limbs, ripping through the grave in search of the warmth of fresh blood.
The ritualistic ambience of Black Funeral is found in various substructures and intros, where human bones are utilized by Marchozelos and Akhtya Nachttoter. Like the complete blackness of tarik den afraj-pedak, wherein the Throne of Ahriman is found in the coils of serpents and chthonic shades, so you will find the essence in the violent and hateful screams of Akhtya Nachttoter.
Lyrically VUKOLAK is an evocation of the sorceries practiced by The Black Order of the Dragon and the Varcolaci Cultus. The demonic-lycanthropic electric terror of Marchozelos is harmonized with the summoning of the drums of Aeshma, the demon of the bloody mace.

Vukolak is stirred forth in the nightmares of the listener; the very essence of the Varcolaci-Astwihad Sigil is the gateway to each individual. Black Funeral's VUKOLAK will be hated and adored as primal black cult metal; it is not for the ears of all.

Black Funeral was founded in 1993 by Akhtya Nachttoter with the aim of creating cold, haunting black metal with themes of vampirism (based on Nachttoters practice in The Black Order of the Dragon), Luciferianism, Satanism and The Left Hand Path ritual practice in general. The band recorded several demos and soon issued their debut in 2005, "Vampyr Throne of the Beast".

Black Funeral was one of the first seminal cult black metal bands in America. Inspired by early Bathory, Von, Blasphemy, Celtic Frost/Hellhammer, early Emperor, Mayhem and Burzum, ?Journey's into Horizon's Lost? was recorded and distributed everywhere possible. The recordings ugliness, bad production and extreme sound placed Black Funeral as one of the most chaotic black metal bands in the USA. Musically Black Funeral was a cold and raw mix of black and deathlike metal, always ugly and harsh.

Black Funeral before going dormant recorded an album, "Belial Arisen", based on lycanthropy, Vampirism and the image of Demonolatry with a session member. This recording, which is reminding of early Emperor, Bathory and Mayhem, was a cold and very raw recording focused on the blood rites of Bathory and the demonic sorceries practiced by Coven Nachttoter, an extension of a black magical guild founded by Michael W. Ford. Black Funeral in the early 90's was one of the first of the second wave of Black Metal bands, leading the way in America and releasing numerous Antinomian works which questioned everything considered "truth".

In 2003 Black Funeral decided to continue, while not in a live situation, but in a new presentation of Sonic Black Magick. Behemoth Productions from Italy has released now worldwide "BELIAL ARISEN", the last pure black metal recording from the band to the masses. An Ensorcelment of Sound, the vampyric essence is being unearthed again from its grave.

In 2004 while producing dark industrial recordings of Psychonaut 75, Ford was developing methods in the studio to produce quality black metal, having discovered a way to do this in the vision and scope of Black Funeral, ?Az-i-Dahak?, the new CD was recorded. Black Funeral has returned as a black metal band which displays more cold power than any previous recording in Black Funeral's 10 year + age.

The music of ?Az-i-Dahak? is a black metal formed and created in an industrialized way, although never loosing the essence of cold and brutal black metal. Michael W. Ford has spent years working with industrial and ambient music, thus began creating black metal again with strong mechanical influences. The concepts of ?Az-i-Dahak? present a clear connection between the Son of Satan and the music of the CD. WATERS OF WEEPING, the abyssic infection of the Qlippoth has returned, Black Funeral continues to awaken the daemonic within...

In 2010 Black Funeral are unearthed with "VUKOLAK", an extreme and violent black metal album which will further establish and refocus the band as a force of the abyss, the very manifestation of vampyric darkness.

There have been several line up changes in the past, however current members are:

Vampyr - Throne Of The Beast