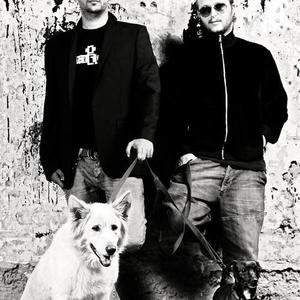 1) Black & White are Samuel Wallerstein and Yaniv Biton. Together they represent one of the biggest promises to come out of Israel. The due have invented a new Psy-style which is heavily influenced from Techno, Industrial, Electro and new wave music. Their atmosphere is unique and their story telling is one of a kind. Their debut album ? "Frame by frame" was released in 2005 and since then they are touring the world and releasing tracks on many compilations of various labels such as: HOMmega, Tip world, Phantasm, Crystal Matrix, Digital Oracle, FinePlay, Sirius, Com.

act and more. Black & White tracks have always been considered original and innovating, so it was no wonder that many artists like Deedrah, Domestic, Chakra, PTX, Bizzare Contact, Quantum and others have asked to either remix or collaborate with the band. Black & White have just finished a remix for Astrix's "Underbeat" (to be released on Astrix's "Future music" single) and now they are working on a remix for their classic hit "20 for 7"

2) Black & White is an eurodance project from Italy, which was arranged and produced by Massimo Traversoni & Roberto Calzolari.
Singles: "Do You Know?" (1994)

3) Australian rock band:
When seminal Philip Island prog rock band The Format dissolved in 2003 under the mounting pressure of physical injuries and a constantly shifting line-up, vocalist Ant Lewis and drummer Steve Alexander weren't prepared to return to earth just yet. With an advanced pedigree that had seen them support Sunk Loto, perform a stunning acoustic set live on Triple M and appear at the Pyramid Rock festival, the choice was clear: a new band, a new direction, and great hair.

Fast-forward five years later and they've finally returned ? older, wiser, better dressed ? as Black & White. Together with the live line up of guitarist Rohan Stevenson and drummer Shane Russel, what began as a tentative studio project has now blossomed into a world-class act that sharpens their powerfully accessible melodic blade with a sizzling electronic edge. With catchy, big, driving tunes, there is enough here to get anyone moving. Whether it be the irrepressible hooks of first single And Then Some, the breathless pace of I Still Care or the chugging riffage of Summer Sun, Black & White ironically polarise no-one.

With their debut album The New Republic slated for an early 2010 release, Black & White aren't so much poised for success as unbuttoning their top-buttons and fast approaching it on the back of masterfully crafted modern songs that speak for themselves.

Catch them punching out their slick grooves live at a venue near you and become part of the new republic.

4) British rock band:
Black & White is a young four piece rock band from Epsom, Surrey, England. The band members are: Matt Lamb - Guitar & Vocals, Ed Price - Bass & back up vocals, Henry Bird- Guitar, and Guy Allison - Drums. Formed in the summer of 2006, Black & White write and perform their own orginal songs and their musical influances include many bands from Red Hot Chili Peppers and Rage Against the Machine to M&ouml;tley Cr&uuml;e and Guns 'N' Roses.