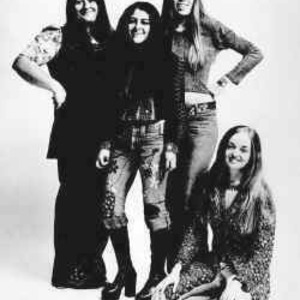 Birtha was one of the leading female rock bands performing during the early 1970's. The band consisted of four women: Shele Pinizzotto ( guitar), Rosemary Butler (bass), Sherry Hagler (keyboards) and Liver Favela (drums). All four members of the group performed lead vocals and harmonies. Liver was the last member to join Birtha in 1968. The group immediately started playing the club circuit and toured from California to Alaska.

From 1968 to 1971 Birtha worked to tighten and refine their rock sound and in 1971 they started writing their own material. Most of the material was written by Birtha, but there were a few songs which were written in partnership with other parties including, Mark Wickman and Gabriel Mckler. Birtha signed a record contract with Dunhill Records in 1972 and recorded their first album, "Birtha" with record producer Gabriel Mckler and Engineers, David Hassinger and Val Caray. After the release of their first album, Birtha began playing rock concerts and clubs throughout the U.S., Canada and Europe. While taking breaks in their home town, Los Angeles, they would often play The Whiskey and The Troubadour and frequently played a club in Glendale, CA. In 1973 Birtha recorded their second album, "Can't Stop The Madness" with producer and engineer Christopher Huston. The band was on the road for more than 250 days a year and played with groups like, Fleetwood Mac, Alice Cooper, Poco, Black Oak Arkansas, Cheech and Chong, The Kinks, B.B. King, Three Dog Night, James Gang and many more. The band broke up in 1975 and all the members went their seperate ways.