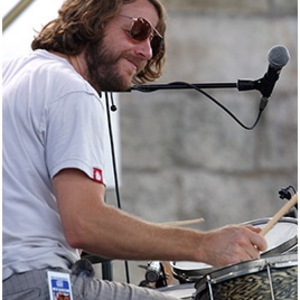 Billy Martin plays drums and percussion for the avant-garde jazz-funk trio Medeski, Martin & Wood. Before becoming part of Medeski, Martin & Wood, he was part of Chuck Mangione's touring group for four years. He has also been a percussionist for the The Lounge Lizards and with the John Lurie National Orchestra, and he has collaborated with artists such as John Zorn, Bob Moses, DJ Logic, and Miho Hatori.

He has also started his own record label called Amulet Records, specializing in eclectic percussion albums. On the side, Martin is a visual artist whose work can be seen on the packaging for Medeski, Martin & Wood's albums, most notably the cover of Last Chance to Dance Trance (perhaps): Best of 1991-1996.

Martin also sometimes goes by the moniker Illy B. The most notable releases as Illy B include the Illy B Eats series of breakbeat records. DJ Logic convinced Martin to record a breakbeat album for DJs and other producers to use and remix. At the last minute, Martin decided to place an insert which invited remixers to submit their mixes for a follow up compilation, and Drop the Needle was born.