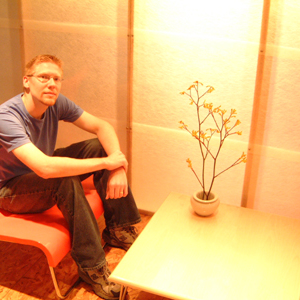 Bill Van Loo is a musician, artist, teacher, web developer, and follower of Jesus Christ. Musically, his style ranges from hip-hop influenced rhythms to uptempo electronic jams to carefully composed ambient soundscapes. Bill has released music on a number of labels, including a compilation appearance on the Planet E compilation "All Access" and a 7" single on Berlin's City Centre Offices in 2001 featured the delicate love song "tones (for Sarah)".

His live performances that started out as strictly electronic affairs (at such events as the first Detroit Electronic Music Festival and Ann Arbor's Immedia series) have evolved to include acoustic and electric instruments, as well as vocals.

His personal projects label, chromedecay, has released a number of albums of his material. He is also involved in the American/Canadian new media collective thinkbox, releasing material on the two thinkbox editions releases "settings" and "guitar", and performing with thinkbox at events such as the Movement festival in Detroit (formerly the Detroit Electronic Music Festival) and the Mutek festival in Montreal.