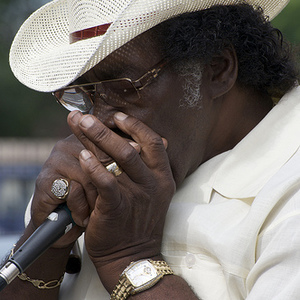 Born in Grenada, Mississippi on May 16, 1932, BIG GEORGE BROCK spent his teenage years near Clarksdale, Mississippi, before settling in St. Louis, Missouri, in the 1950s. While living in the Clarkdale area, he did back-breaking fieldwork, boxed on weekends, and played the blues. He remembers hanging out at house parties in the Delta where folks like Memphis Minnie would show up. Even today, he still has relatives in the Clarksdale area, including his blues-playing nephew James "Super Chikan" Johnson and brother-in-law Big Jack Johnson.

In St. Louis, Big George owned a series of blues clubs in the 1960s and 70s, including Club Caravan (formerly the Early Bird Lounge) - where his wife at the time was killed by stray bullets from a drunk's pistol - and New Club Caravan. Later, Big George & the Houserockers was the house band at Climmie's Western Inn for 12 years. During his career, Big George has played shows with blues legends like Muddy Waters, Howlin' Wolf, Jimmy Reed and many others. Garrick Feldman of the Arkansas Leader has said Big George is "about as good a harmonica player as any of the blues greats, and he knew and played with most of them."

At various times, he's had fellow Mississippians Willie Foster, Big Bad Smitty, Terry "Big T" Williams and Jimbo Mathus back him at shows, but most often, you'll find him with one of the best "unknown guitar players" in the biz: Mr. Riley Coatie. Besides his 6-string skills, this native of the Arkansas Delta is also known for his amazing family blues band. Coatie taught his children Tekora, Latasha and Riley Jr. to play in the old classic style that Big George Brock loves. (Note the drummer's grunts on "Louisiana Blues." Talk about feeling the blues.)

In Living Blues Magazine (issue #78), Scott Bock and Jim O'Neal described Big George, saying "His tailored red or green outfits and classy fedora tell you he takes his gigs seriously. There's a lot of Howlin' Wolf in the roughness and depth of his sound ... But he's not an imitator. Brock sings in a straight-ahead style that packs a lot of power."

Goner-records.com reviewed one Big George show like this: "Big George looked great in his pink suit and pink hat. We weren't ready for the onslaught to come - furious Muddy Waters-styled blues stomping. It was the closest thing to seeing Muddy Waters in his heyday that I'll ever get to see. I just kept looking at folks who should know, and we'd just nod, mouths open, or shake our heads in disbelief. It just doesn't seem possible that a band today could be that good." England's Blues & Rhythm magazine called Big George's set at Clarksdale's 2004 Sunflower River Blues & Gospel Festival "the real deal."