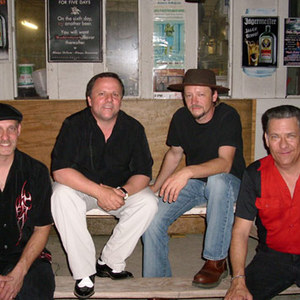 Big Al & the Heavyweights featuring Big Al,Harmonica Red, James Bass,Dean Galatas. All you have to know about these guys is the fanatical following of "Gumbo Heads" that numbers in the thousands. They drive hundreds of miles to get a serving of Big Al and the Heavyweights musical gumbo. You see, Big Al and the Heavyweights is an unconventional original music band that hails from New Orleans, LA. Why Big Al himself is from The Big Easy. That is where he grew up, surrounded by the sounds of New Orleans music - Jazz, Blues, Zydeco, Cajun, Rock, and Swamp Pop. It is these influences that make Heavyweight music so accessible and fun. Big Al and the Heavyweights will be on the road 200+ days this year, and it is this regimen of hard touring for the last six years that has made them one of the most well known, original bands in any musical format.

The membership of Big Al and the Heavyweights starts with Big Al himself from New Orleans on drums and vocals, James Bass from Baton Rouge on lead guitar \vocals, Dean "The Bass Machine" Galatas from Bayou Liberty on bass and Harmonica Red also from Baton Rouge on harmonica\vocals.

Born and raised in New Orleans, LA, Al is a real New Orleanian, going to Mardi Gras after Mardi Gras, seeing the sights of Mardi Gras through the eyes of a child. That same wonderment and jubilation comes through Heavyweight music - the music that helps people forget about the news du jour. None other than head Blues Brother, Dan Akroyd, has described Al as the "pounding, driving force" of Heavyweight music. Incidentally, Dan is a big supporter of the Heavyweights, playing all three of their CD's on his syndicated House of Blues Radio Show. They even play at the Chicago House of Blues for 2 to 3 nights in a row three times a year! But Dan Akroyd is not the only high profile celeb that knows the power of Big Al - Chef Emeril Lagasse tapped them to be musical guests for his season premier of Emeril Live!

Big Al and The Heavyweights began in 1992 as the Unknown Blues Band with founding members Warren Haynes and Al Lauro. The two met performing in country outlaw, David Allan Coe's Band. They quickly found a common interest and that was their love of music especially the blues. Soon they put together the U.B.B and began performing at small clubs and festivals. The band began getting notoriety for their lengthy sets and their ability to fuse their many musical influences into a powerful brand of blues.

The band started opening for many acts. One such act was B. L. T., which included Dickey Betts, Chuck Leavall, and Butch Trucks. Dickey Betts was truly inspired by Warren's incredible guitar prowess and soulful vocals and offered him a gig in a band he was putting together. Naturally, Warren took the gig and the rest is history. He went on to become a major force in The Allman Brothers Band in which he currently plays as well as his own band, Gov't Mule. As for Big Al, he had lost an incredible guitarist and vocalist but never a friend. The only thing left to do was to move on and that he did; putting together a new band and landing a record deal with Scott Mullins' Rollin and Tumblin Records to create Big Al and The Heavyweights. Big Al and band began touring the country relentlessly focusing the band's sound more on his Louisiana roots and the music that began being called "Gumbo Grooves". Their first CD, "That Ain't Nice", received critical acclaim from all the major blues societies and publications. Finally, the big break came when Dan Aykroyd featured the band's song "House Party" on his House of Blues Radio Show as the Blues Breaker of the Week. Next, the CD was nominated for Blues Album of the Year by one of largest entertainment organizations in the U.S., the Nashville Entertainment Association. The band was honored to having been nominated along with fellow nominees: Roscoe Shelton, Earl Gaines, and Jimmy Hall (who won) formerly of the famous southern rock band, Wet Willie. The band's next CD was recorded on the Bluziana Music record label and was entitled "Hey, Hey Mardi Gras". Once again, number one Blues Brother Dan Aykroyd took notice and featured the song "Cajun Roux" on his House of Blues Radio Show garnering the band even more attention. "Hey, Hey Mardi Gras" was also nominated for a Nammy Award for Blues Album of the Year by the N. E. A. along with Delbert McClinton (who won), Johnny Jones, and Bonnie Raitt guitarist, Rick Vito.

After a web broadcast from the famous J & J Blues Bar in Ft. Worth, TX The band kept getting requests for a live CD. Hence, they recorded "Live Crawfish" captures the band with all their energy and power. It was very well received and also featured on the House of Blues Radio Show "Late Night Gumbo Party" was recorded with noted blues producer, Fred James, at the helm. Fred has worked with KoKo Taylor, Johnny Winter, Charlie Mussellwhite and Son Seals. "Late Night Gumbo Party" once again caught the ear of Dan Aykroyd and he featured the song, "Hey, Hey Nanette" as the Blues Breaker of the Week. He also interviewed Big Al on the show. The CD charted at # 4 on the Living Blues play list charts. Here's what Living Blues says in reviewing "Late Night Gumbo Party", "If you're missing the sultry, sticky Crescent City scene and want a quick fix, this CD is for you. " Bruce Iglauer, the president and founder of Alligator Records produced the current Cd, ?Nothin But Good Lovin?. It is the bands most eclectic record and has truly defined the band's sound.

"Emeril Cooks Up Some Gumbo Grooves"
The Food Network's, Emeril Lagasse, heard a copy of "Hey, Hey Mardi Gras" and loved it. He had the producers of his show, "Emeril Live", get in touch with the band about a performance on his Mardi Gras show. It was the premier show of the season and the seventh most popular show on cable television for the week with a viewership of 43 million people across the U.S. The response from the show was nothing short of amazing. Bluziana Music had to rush to have more copies of the CD pressed just to keep up with the internet and mail orders. That exposure has earned the band much deserved recognition and spots on some of the biggest festivals in the country. The band has also been featured on the Cajun and Creole cooking shows of "Emeril Live."

Recently, Alligator Records had their award winning artist, Michael Burks, record "Make It Rain" for his premier release for the label and the cd's title track. Zydeco's reining king, C. J. Chenier, has recorded "Eat More Crawfish" for his Alligator CD, Step It Up. Soul legends, Earl Gaines Johnny Jones and Charles Walker recorded the band's songs ?Why Can't We Be Alone? and ?Wrestlin with the Blues?. The band is also featured on a new compilation CD entitled; "Ultimate Mardi Gras" on New Orleans based Mardi Gras Records. Other artists on the CD are Professor Longhair, Earl King, The Rebirth Brass Band and Rockin Dopsie.

In closing, when speaking of Big Al and the Heavyweights, they can best be summed up by saying they are a real band. They are a band that does it the old fashioned way - club-by-club, fan-by-fan. They have an active mailing list that numbers over 7,000 names. From Maine to Key West, Corpus Christi to New York City and every place in-between.