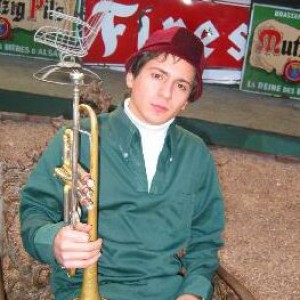 In 2001, I wrote a song about a girl I had a crush on, called Your Daughter. As it turns out, Regina Spektor heard it and recorded my verse in her song, Somedays, from her album, Soviet Kitsch (2005 Warner Bros). Spektor performed the song on The Tonight Show.
When I'm not juicing myself for song ideas, I make a living trumpeting, singing and teaching around NYC. I've had the great pleasure performing with bands such as Antibalas, The Monkees (the 60's band), TV on the Radio, Pete Yorn, Sinead O'Connor, Duke Spirit and Spoon, to name a few. I've recorded trumpet with bands such as TV on The Radio, The Charlie Hunter Quartet, Passion Pit, Massive Attack, Yeah Yeah Yeahs, Foals, Davy Jones, Bat for Lashes, Chin Chin, FunkeyMonkeys, Teo Macero (Miles Davis-producer) and Zach De La Rocha (lead singer from Rage Against The Machine). I have also appeared on the David Letterman show and The Colbert Report with TV on the Radio.
Working with so many diverse and hardworking bands has also been a serious inspiration. From a trumpet players perspective, I get a chance to listen and be an audience member from the stage. I often feel like I have the best seat in the house. I take in all my influences and hope they come out in my songwriting. According to Albert Einstein, ?energy can neither be created or destroyed?, I hope you can hear the benefits of being around such great energy. Please visit www.ericbiondo.com for more information.- Eric Biondo

Looking In The Mirror