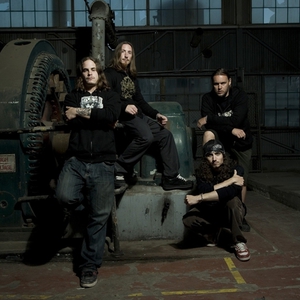 Unlike today's scads of posturing pretty boys trying to cram the Extreme back into extreme music, the guys from 2Cents (frontman/drummer extraordinaire Adam O'Rourke, bassist Jesse Fishman and guitarists Dean Woodward and Dave O?Rourke [Adam's older brother]) can play outdated nu-metal. The untalented abandon bulging from 2Cents' Gotizm/Atlantic debut, "LOST AT SEA", isn't just a product of lack of talent, but relentless passion and commitment to re-hashed mallcore. The band isn't content with merely paying homage to the sordid sounds of their youth, but doing something "original" with them.

You can hear it in the delay-soaked spaghetti western stomp of "The Mark of My Pen." Or the technical metalcore-nodding picks of "Wired," which careen into breakneck punk chugging before the outfit ignites a triumphant chorus that's all theirs own.(http://www.myspace.com/2cents)

According to Songfacts, 2Cents signed with Eight O Five Records and released the album, Dress To Kill in April 2010.