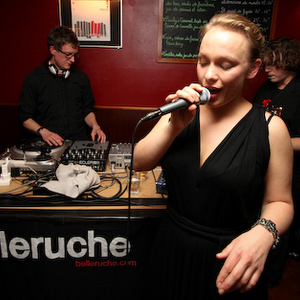 Belleruche is a band consisting of Kathrin DeBoer, Ricky Fabulous, and DJ Modest. Formed in the lesser bars and pubs of North London in 2005, the band now record for the Brighton based Tru Thoughts label. Influenced by vintage blues records, punk girl drummers, obscure 60's cover bands and experimental west coast turntablists, they describe their sound as 'Turntable Soul Music'. Belleruche released a series of three extremely limited 7? records on their own Hippoflex Recording Industries label before signing with Tru Thoughts.

Belleruche released a series of three extremely limited 7? records on their own Hippoflex Recording Industries label before signing with Tru Thoughts. These individually numbered 45's (with hand screen-printed sleeves) quickly sold out in the UK's independent record stores and attracted a cult following in the UK and Europe, having been hand-distributed by the band at gigs.

In 2007 Belleruche signed to Tru Thoughts and their debut album Turntable Soul Music was released in July of the same year, gaining admiring reviews both at home and abroad and becoming the fastest-selling debut album in the label's history.

The songs on ?Turntable Soul Music' were written in train carriages, dubious minicabs and pub backrooms around the UK whilst the trio gigged everywhere they could. The songs were then forged and reworked in the band's electrifying live shows. From their initial sunday residency in the Salmon and Compass in Angel, London to gigs all over Europe, Australia and Asia. ?Turntable Soul Music' is like a weird trawl through a dusty basement full of the best records you've never heard of, whilst a voice you can't quite pin down sings hooks you can't forget.

Their live show marks them apart, using only a turntable, sampler, guitar and microphone, they combine to produce something markedly different. Sounding at once both weird and distinctive, but at the same time musical and compelling, they have played at venues as diverse as Montreux Jazz Festival, The Dance arena at Glastonbury, and many underground nightclubs.

In October 2008 Tru Thoughts released The Express, the bands second album. Following on from the live songwriting and broken leads ethic of Belleruche's debut, 'The Express' has maybe a tougher sound.

Their latest album 270 Stories - including the singles Clockwatching, Fuzz Face and 3 Amp Fuse - was released in October 2010. The band will be playing festival dates this summer and touring the new album in autumn.

Kathrin DeBoer
Raised on a pirate boat sailing the South Pacific Ocean, with only Billie Holiday and Spanky Wilson records for company, Kathrins voice carries the soul of the wind off the cape mixed with the grit of illegal Polynesian rum bars. Lyrics written in bottles cast into the sea found their way into three continents; Kathrin jumped ship and found London.

Ricky Fabulous
Leo. Baby. Following an adolescence chasing girls and heavy rock bands, Fabulous found himself trapped working for a Maltese gangster in a frozen northern town. Whilst keeping warm locked in a damp basement, he found a stack of quarter inch tapes and discovered the work of Grant Green and Django Reinhardt, which gave him the energy to slip out of town, heading south on a freight car clutching a false identity and a forty-year-old guitar.

DJ Modest
Growing up in the deep south, in engine oil and mud, Modest discovered hiphop on a stolen radio, sneaking into clubs through broken windows to hear more. Building turntables and mixers from scavenged electronic gear and two stroke engines, he created a soundsystem and played unlawful hiphop parties in strange woodlands to farmers. He coaxes twisted Bluenote solos and broken drums from Shure m44-7s whilst drunk on moonshine.